To describe Jamie True as a 'serial entrepreneur' would be something of an understatement. Since he left school aged 17 he's had a hand in the launching of no fewer than nine businesses, five of which have attracted multi-million dollar valuations. Having just tuned 40 his latest venture, a promising employee benefits company, has attracted investment from the former Tesco boss Terry Leahy.

Though he’s now known for his work in technology, True’s first taste of business was with a textiles firm, ‘which really wasn’t my true passion but it was something I got into at an early age,’ he tells MT.  His big break in technology though, came with a business that was dealing in something really rather different – football players.

He set out to build an online marketplace where clubs could complete transfer deals. ‘We realised that there was no liquidity for clubs to actually buy and sell on a marketplace if they wanted to,’ he says. ‘There was no digital platform to help. We took it to a large football agent and he nearly fell off his chair when he read the business plan.’

It might sound like the fantasy business of someone who has spent too long playing Football Manager games, but it clearly made sense – Manchester United was the business’s first client, and soon the whole of the Premier League was signed up just based on the concept alone – the actual product hadn’t even been built yet. The business floated in 2000 and was eventually bought up by the FA.

Grapple is probably True’s best known business. It’s an app development company that uses proprietary software to convert web code automatically into iOS and Android applications, without the need to have to do all the legwork yourself. After initial success attracting clients like Whitbread and the Post Office, True sold the business for £39m in 2013 to payments company Monitise – which was then one of the most highly regarded members of the British tech industry.

Things haven’t been looking great for Monitise since then – its share price lost half its value last year as revenues haven’t kept up with expectations. But True says that Grapple, now called Monitise Create, has been one of the strongest performing areas of the business. ‘It’s grown incredibly rapidly since the acquisition,’ he says.

True’s latest venture, Work Angel, came about thanks to an idea from his father Frank, who was involved with the creation of the first luncheon vouchers scheme back in the 1950s. He came to see True and gave him a business plan that aimed to bring employee benefits into the 21st century. 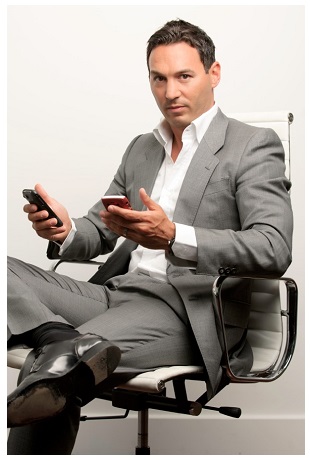 ‘I read it and said "this is not fit for purpose" and he said "that’s why I gave it to you".' As True looked into the idea he saw that many of the fastest-growing businesses in the world were in employee recognition - and so the idea for Work Angel came about.

The company aims to help employers deliver staff benefits, rewards and discounts via a smartphone app.

It has an expanding list of clients including a number of blue chips, though True says he can’t name them. He’s also keeping quiet about numbers, but says his ambition is to have 600,000 users this year.

The business has even attracted the attention of former Tesco chief exec Terry Leahy. It was announced last week that Leahy had put $5m (£3.3m) into the business alongside his investment partners Bob Willett, Iain McDonald and Bill Currie.

'Investors are really looking for hunger from an entrepreneur,' says True. 'Hunger, no naivety and good delivery. When talking about what you do you need to be quite visual.

‘It’s also got to be competitive. When looking for the right investors it’s good to spread and meet as many people as possible.'

He adds that investors will be pleased if you're putting in money alongside them. 'It doesn’t matter how rich or poor you are, it’s all pro rata. It means a lot if you’re putting a percentage of your wealth into it.'

Britain’s technology scene often gets a bad rap compared to the US, and while it’s true we’ve never made anything on the scale of Amazon, Google of Facebook, True feels like London is in some ways ahead of California.

‘Right now the UK and especially London, the tech scene here is amazing,’ he says. ’I don’t need to travel to find great concepts to invest in because there's so much in London. I go to California and I really scour but I can’t find anything good [to invest in]. It’s either 17 times overpriced or just not realistic. It’s incredible how London will be such a force in the future.’

True seems like an exceptionally busy person, so I’m curious how he manages to keep sane. ‘I just enjoy it,’ he says. ‘You’re not sane when you’re under real financial pressure. When you’ve got a few good [businesses] under your belt some of that pressure comes off and you can just really enjoy it.

'I love what I do and I suppose it’s a state of mind – busy and happy don’t need to conflicting. If you’ve got the mentality that actually nothing will ever got my way and I’m just really excited, then you’re always happy.’

True says that one of the most useful things for an entrepreneur is to have a great mentor who’s done it all before. In his case it’s advertising veteran Jon Claydon, who is Work Angel’s chairman.

‘Having someone who’s done it before, who’s open minded and wants your best interest can really inspire you,’ he says. ‘And when someone inspires you as a mentor, you never want to let them down. That’s a big part of what really stirs me up – they become like a big brother.’ The hyperactive entrepreneur is even finding the time to be a big brother to someone else, mentoring the the now CEO of Monitise Create.