Gwyther has edited MT for the past 16 years and has built the brand into Britain’s biggest media cheerleader for women in business. From MT’s regular Inspiring Women events and annual ’35 Women Under 35’ campaign, to profiles, advice, opinion and analysis online and in print, Gwyther is dedicated to championing the country’s brightest businesswomen – and helping the next generation of female talent to reach the top.

Some of the country’s most powerful women have appeared on MT’s front cover – from easyJet’s Carolyn McCall to TalkTalk’s Dido Harding to Virgin Money boss Jayne-Anne Gadhia.

‘I'm very flattered to be chosen as a "Male Agent of Change" by the government's Women's Business Council. Not least because I was never going to make it onto our 35 Women Under 35 lists because of two pretty obvious disqualifying obstacles,’ says Gwyther. ‘We can't claim to go back quite as far as the suffragettes but at MT we've been championing the cause of women in business for nearly two decades. The continuing under-representation of women in British business at the higher levels – not just within the FTSE 100 – is something we all need to think carefully how to solve.'

It shouldn't just be women who fight for gender equality. Men have to be part of the solution; they are (disproportionately) the business owners that can provide flexible working, the co-parents who can share parental leave, and the bosses who can provide a supportive atmosphere to women returners.

The Women’s Business Council was set up four years ago by the then-Home Secretary, now-Prime Minister Theresa May to harness female talent in the workplace and help drive UK economic growth. The council was chaired by Mitie’s outgoing boss Ruby McGregor-Smith until this July, when the unstoppable Cilla Snowball – the most powerful woman in British advertising – took the reins.

Speaking at the awards ceremony last night, Minister for Women, Equalities and Early Years Caroline Dinenage said the government wants 'every girl in this country to grow up knowing there is no limit on their ambitions'. 'The benefits of helping women to unlock their talents are huge – eliminating the gender pay gap could add £150bn to our annual GDP in 2025. That’s an opportunity that neither government nor businesses can afford to ignore.' 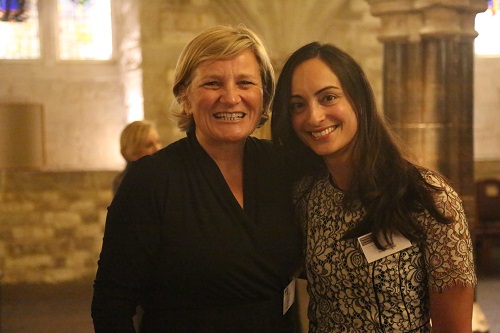 Two-tier workforce “a stain on our national conscience”, says CMI

The one thing every board member needs to know

How to prevent losing female leaders to the menopause

41 hours ago
Food for thought