Back in the mists of 2010, before becoming prime minister, David Cameron made his now infamous pledge to cut net migration to ‘the tens of thousands’. Not only has he seen that target get further and further away, net migration is now at record levels. More fool the Tories.

The difference between those entering and leaving the country hit 330,000 in the year to March, according to the Office for National Statistics. That’s 94,000 higher than the previous year and breaks the previous record of 320,000 set a decade ago. 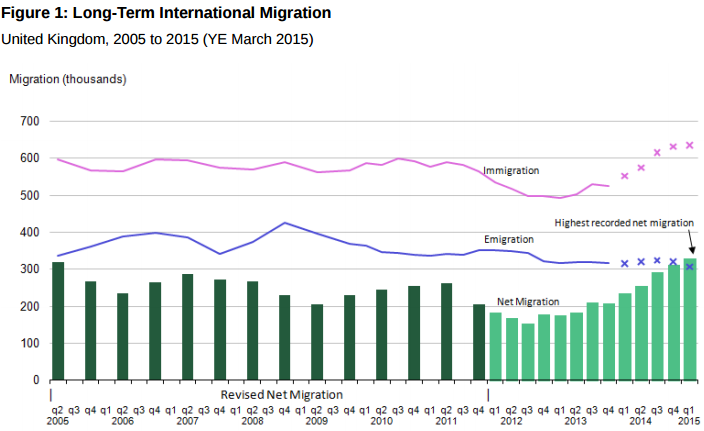 There is a statistical caveat: the figures are an estimate extrapolated from small surveys at the UK’s borders, with a +/- 42,000 margin of error. So the record may have been smashed even more convincingly or not at all. But it’s the headline figures that matter for those all-important headlines, of course.

Immigration minister James Brokenshire was unsurprisingly ‘deeply’ disappointed. ‘While these figures underline the challenges we need to meet to reduce net migration, they should also act as a further wake-up call for the EU,’ he said.

‘Current flows of people across Europe are on a scale we haven't seen since the end of World War Two. This is not sustainable and risks the future economic development of other EU member states.’

With the Calais crisis dominating the media and Cameron scaremongering about ‘swarms’ of migrants flooding the country, concern about immigration among the British public is at a record high. Half told pollster Ipsos MORI it was one of the most important issues facing the UK and 32% said it was the most important one.

So it’s no surprise Brokenshire conveniently neglected to mention the impact of said flows of people is largely on other EU countries. To give just one example, Germany has said it expects 800,000 asylum applications in 2015. The UK received fewer than 26,000 in the year to June.

So the voices of the IoD and think tank British Future jointly calling for a more reasoned review of immigration policy today were rather lonely ones. ‘Scrabbling around to find measures to hit a bizarre and unachievable migration target is no way to give British businesses the stable environment they need,’ IoD Director General Simon Walker said.

MT agrees. Of course there are downsides to increased immigration – one can’t ignore the concerns of half the population in a democracy, for starters. But the debate is far from balanced: immigrants have made a net contribution of £25bn to the UK over the last decade, for example.

And businesses are increasingly chafing against the government’s restrictions on bringing in workers from outside the EU, especially in sectors like tech where there’s effectively an all-out war for talent.

The government is unlikely to stand up and admit it’s failed to do something it’s repeatedly banged on about for the last five years, though. And with an EU referendum on the horizon this issue is unlikely to go away. Businesses that want sensible immigration policies (and to stay in the EU) ought to be worried – and tell the Tories just that.