Sound the trumpets: the number of businesses in Britain has reached a new record high. No matter that it has risen every year since the turn of the millennium, even in the depths of recession, this is a moment for the government to celebrate the success of its ‘long-term economic plan.’

Small businesses (those with fewer than 50 employees or, indeed, none at all) accounted for a whopping 99.3% of the total ‘business population’. But those big bad corporates certainly threw their weight around, representing 53% of turnover and 40% of employment. 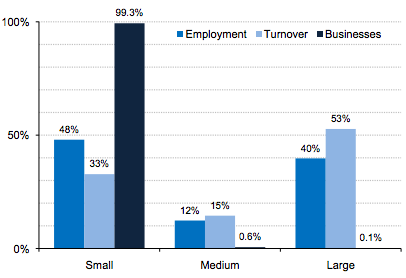 The contribution of different-sized businesses to total business population, employment and turnover at the start of 2015. Source: BIS

More than three quarters of businesses don’t actually employ anyone apart from the owner. Not surprising, perhaps, when you consider 62% are sole proprietorships, although it does mean some of the 436,000 ordinary partnerships and 1.6 million companies don’t have any staff either. 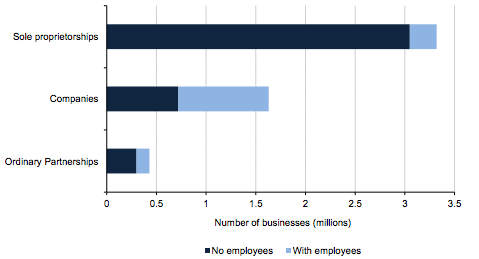 Businesses with and without employees, by legal status. Source: BIS

Indeed, since 2000 90% of the increase in the number of businesses has come from non-employing ones. That has fallen relatively, but was still responsible for three quarters of the 146,000 growth in 2014.

You could look at this a number of ways. Firstly, that the increase in people starting out on their own is a sign of a healthy, growing entrepreneurial spirit up and down the Isles. Or that companies’ reluctance to hire staff has meant people are forced into sole trading out of necessity. Indeed, new sole traders may be unwilling or unable to take on employees themselves.

However, with employment at a record high and the unemployment rate at its lowest for more than seven years, there’s plenty of reasons to feel positive today. We’ll let business minister Anna Soubry have her ‘excellent news’.