The most innovative areas in the UK are apparently not our metropolises. Oxfordshire is the hotbed of new ideas, as part of a so-called ‘arc of innovation’ stretching from Cambridge through the roundabout mecca that is Milton Keynes to Gloucestershire in the west – avoiding London.

That’s according to research by the Enterprise Research Centre, which tracked firms that had introduced new or ‘significantly improved’ products, services and processes, engaged in R&D and/or collaborated with other companies. 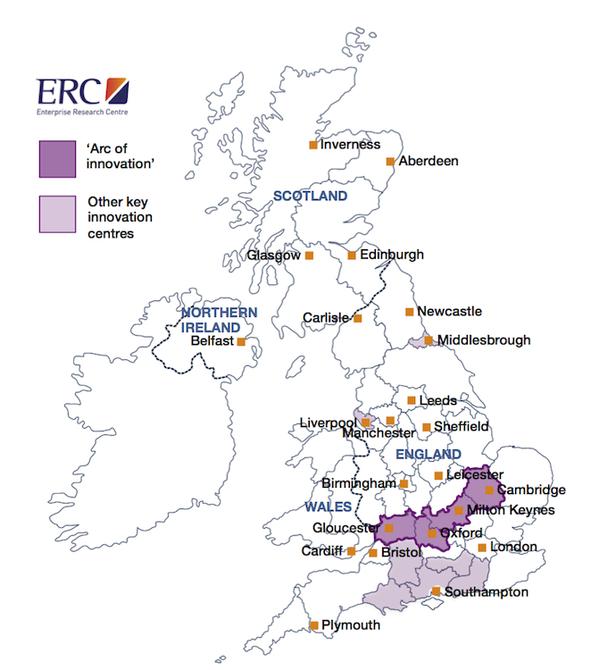 Oxfordshire, where Oxford University is aiming to find £300m to fund spinouts, took the top spot, followed by Greater Cambridge & Peterborough, the south east Midlands and Gloucestershire. London languished in 25th place, with just 16% of companies carrying out R&D compared to 28% in Oxfordshire, which the report put down to its relative dependence on financial and professional services and law.

Manchester, the heart of chancellor George Osborne’s ‘Northern Powerhouse’ policy, was just 20th, while Cumbria, Northern Ireland and eastern Scotland were in the ‘relegation spots’ at the foot of the table.

Some caveats are needed, though. The data is from the 2013 UK Innovation Survey of 14,000 companies covering 2010 to 2012, meaning it’s somewhat out of date. And while you would struggle to find anyone who doesn’t think innovation is A Good Thing, it won’t make much of a wider impact unless it translates to sales and profits growth and more jobs.

Moreover, given that the data is relative (i.e. the proportion rather than the number of companies in an area being innovative), more profitable innovation in absolute terms probably still comes from London, Bristol and other large cities. The exception is Cambridge, which is both second on this list and has spawned a veritable hive of world-class tech and science companies, including FTSE 100 chip-designer ARM. Sorry Oxford.

55 minutes ago
Food for thought