Everyone knows the narrative of business disruption. David slays Goliath, right? The great, lumbering giants of the 20th century lack the dynamism and agility to defeat the plucky digital start-ups scrambling out of Silicon Valley. It’s out with the old and in with the new.

But the line between Goliath and David isn’t always as clear as that makes it sound. Look at the recent spate of partnerships being formed between the automotive majors and disruptive rascals Uber, Lyft and Gett. It’s tempting to see these as clueless-but-rich corporates piggybacking on smart-but-poor start-ups, but unsurprisingly not everyone agrees with that.

‘Without us, Tesla couldn’t have made it,’ says Laurent Abadie, European CEO of that paragon of 20th century industry, Panasonic. The Japanese firm’s partnered with Elon Musk’s car company to create the famed Gigafactory, a vast, automated manufacturing plant for batteries, which should open its doors later this year. Musk claims the Gigafactory’s high-tech batteries could come to represent half of Tesla’s income, such is the demand for them.

Tesla may get all the headlines, but Abadie insists this potentially world-changing technology – a Tesla Model S is powered by over 6,000 of the finger-sized lithium-ion batteries, but the scope of the technology is far wider – is the fruit of a partnership that reflects Panasonic’s market leading R&D in the field.

‘It’s true that a start-up can move quickly but at the same time they don’t have the resources. In recent years we’ve been investing a lot in small companies and the combination of both is sometimes very positive. To achieve a certain business scale, small companies cannot sometimes make it.’

Getting on board the Tesla express – indeed, partnerships more generally – is just one of the ways in which Panasonic has being trying somewhat frantically to change with the times. It’s not all as PR-friendly as the Gigafactory. Worldwide, Panasonic now employs just over 250,000 people, down from over 360,000 only two ago.

Like most big firms undergoing a ‘transition’ (or worse, a ‘pivot’), this is a firm motivated more by the stick than the carrot. At its heart is the collapse of the Japanese consumer electronics sector. In the 80s, firms like Panasonic and Sony bestrode the world, their TVs and hi-fis the best of the best. Then, in the 21st century, it all went wrong.

‘I think the main reason is that the category required a lot of investment, but at the same time it very quickly became commoditised,’ reflects Abadie, who worked at Sony for many years (‘nobody’s perfect’) before joining Panasonic. ‘When it was about analogue technology, quality was everything. Now everything’s digital, quality is less important and the barriers to entry are less.’

That’s a bit like answering an interview question about your greatest weaknesses with ‘I work too hard’ or ‘I’m just too intelligent’, but he’s got a point. Japanese corporate culture is conservative. Getting everything right – often through the kaizen method of incremental improvement – can make reactions slow and products expensive. 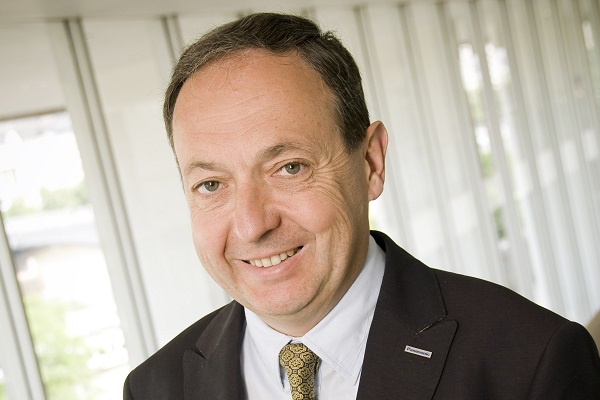 In any case, the results are clear. Panasonic has very rapidly gone from being a mainly B2C firm, to being over 75% B2B. You may not notice the logo as much, but its products are found in everything from aeroplane in-flight entertainment to semiconductors and nursing care equipment.

Within B2B, Abadie says, the future lies in the intersection between hardware, software and services. Of particular promise are the automotive (Panasonic recently unveiled a ‘concept car’, consisting of various on-board computing gizmos and a heads-up display) and the smart housing sectors. ‘The question is where we find ourselves in B2C, which is facing big changes, but at the same time we’re positioned in very strategic segments for the future.’

It’s a nice idea, to think a big business can reinvent itself to keep up with changing times. It certainly seems to be working for the likes of IBM and Microsoft, and if Panasonic can join them it will be an impressive achievement. But ultimately, only time will tell whether this is a genuine rebirth or merely a case of staving off the inevitable.

Little Moons' mochi balls are a social media sensation. Here's what you can learn about...

In Conversation with Sandie Okoro

Leaders aren't born or made, they are found, says the SVP and general counsel for...

By Orianna Rosa Royle
9 hours ago
Women in Business

Who's the most impressive businesswoman you know?

The deadline for the Inspiring Women in Business awards and 35 Women Under 35 has...

What the office reception tells you about a leader

You can learn a lot about culture from watching people come and go, not least...