The 9 to 5, five days a week work pattern remains the norm for most white collar workers but part time working is on the rise. 'Ten years ago I was told it wasn't possible to do a senior, successful business leadership job and still work part time,’ said Karen Mattison, co-founder of flexible working consultancy Timewise. ‘Fast forwarding a little bit I've now discovered that is simply not true. There are eight million people working part time at the moment in the UK, 685,000 of them in the higher tax bracket.’

As more of us are demanding flexibility, employers are waking up to the value of hiring part timers and making their role work for them. But there are still challenges. Landing a part time gig can be testing, especially when so many roles are not advertised with part time as a possibility. Those of us who work full time know it can be hard enough to balance work and home life, but it’s doubly difficult for those who spend some weekdays away from the office.

To tackle some of these challenges Mattison chaired a panel of part timers at MT’s Inspiring Women event yesterday. Here's some of the advice they came up with.

Don’t be afraid to ask

Just because a job isn’t advertised as being part-time doesn’t mean it’s not a possibility, so go ahead and ask. When she was approached about her current role, Amazon UK’s head of fulfilment Katie McQuaid said, ‘I'm not going to come in for this interview unless it's for four days a week because I hadn't heard that you do that that much, and I don't want to waste your time or my time.

‘They came back and said no problem, we understand that's non-negotiable. So when I came into the interview we didn't really talk about it - it was about the skills I had, how I'd approach different problems, the experience I had in different roles.’

Make a name for yourself

If you want to stick with your current employer but with fewer hours then it will be easier to persuade them if they see you as indispensable. Anita Waters, group legal director at Virgin Management, said it’s important to be ‘building your track record and credibility from day one. I got out there, I tried to get the trust of the senior team, which is invaluable. I got such broad experience and between maternity leaves on the legal side I made sure I was leading on a couple of projects, so I was very present and visible.’ Plus, she says, it helps to choose a company that has a good reputation for treating its staff. 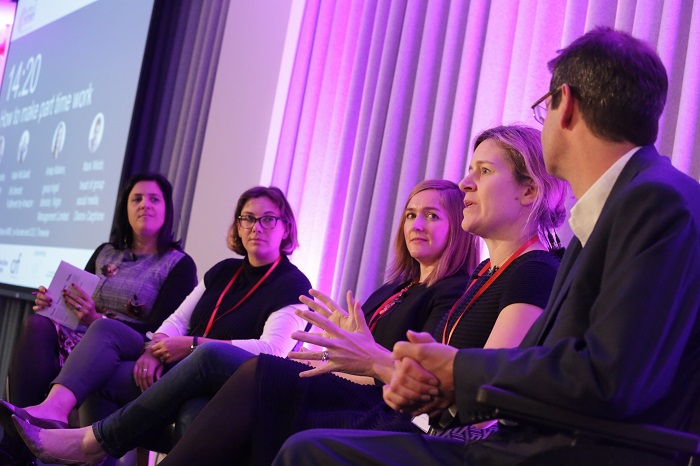 Focus on making a difference, not being present

‘I have a mantra that’s served me well over the years – impact not hours’ says Amelia Torode, chief strategy officer at ad agency TBWA\London. When you’re asking for more flexible hours, ‘If you think about the impact that you have or you believe you’re going to have, as opposed to the hours you’re going to work, it frees up a different kind of conversation.’

‘One of the advantages we have is Amazon is a very data-based company, so when you’re evaluating peoples’ performance, it’s based on goals,’ adds McQuaid. ‘They didn’t care if I was in on a Friday or not, if it’s not made a difference to whether I can deliver on my goals, it doesn’t make any difference to them.'

Build the role around you

If your employer is willing to be flexible and really wants to keep hold of you they won’t hold you to fixed hours and demand you to be at your desk the whole time. After a successful career in communications, Mark Webb was diagnosed with multiple sclerosis while working at Dixons Carphone. ‘PR demands an awful lot of your time,’ he said. ‘Full-on engagement the whole time, often unsociable hours, time in London with journalists, having drinks, coffees, dinners, taking their calls at funny times. I was falling apart, frankly, crumbling and while trying to do PR and probably not doing as good a job as I should have done.’

Then he was asked to meet with the company’s head of HR. ‘I feared that meeting,’ he said, worried they would make him 'chief photocopier’ or ask him to retire. ‘Actually they came to me and said, look Mark, you're not coping, we want to keep you, what kind of job can we work together that will work for the company and for you?’

Prepare to be flexible

If you want your employer to be flexible with you, it helps to offer some flexibility yourself. ‘I work a full week but don’t work Fridays,’ says Torode. ‘But I can’t be as binary as black and white and saying I never work that Friday. But what I do is I always take them back, I roll them over, I take different holidays.’

Webb works 'happy hours' – ‘hours around what my body will allow me to. I need naps, I need to have physio, I need to go to an oxygen tank every week and breathe pure oxygen under pressure, I need all sorts of treatments and I'm off to hospitals all the time, but when I'm not, I'm on social media. It started as 4 days a week and Fridays off but actually now I just work when I can.’

Don’t be a slave to your smartphone

Advances in tech have made it easier to work remotely but they’ve also made it harder to switch off when you’re not in the office. ‘It is a double-edge sword,’ admits Waters. ‘People always say this but it’s so true – you can be the master of your destiny in the way you use it. You’ve got to set ground rules and you’ve got to stick to them.

'If you’re working part-time and you’re trying to preserve that time for whatever your ‘thing’ is outside the office that’s important to you; if you say to people that you’re not available and actually they see that consistently you just can’t resist responding then of course they’ll expect it.'

42 hours ago
Down to business