Business leaders beware: ‘there are no risk free outcomes’ from May’s General Election, according to Deutsche Bank. A majority government is looking like an increasingly distant possibility, but the coalition on everyone’s lips – including the German investment bank’s – is a Labour-SNP centre left love-in.

Deutsche’s calculations show Labour and SNP would command a small majority together. Given the Scottish nationalists have ruled out any tie-up with the Tories, a Miliband-Sturgeon deal (Mili-geon? Stur-band?) is therefore the most probable, according to the bank’s chief economist George Buckley.

The next most likely scenario is a Labour-Liberal Democrat tie-up, followed by a Labour minority government (good news for Miliband eh). In fifth place is a Labour majority, with the current constellation in seventh and a Conservative single-party administration down in eighth. UKIP, on the other hand, is nowhere to be seen on Buckley’s list.

A Labour-SNP deal would cap off an extraordinarily successful turnaround for the Scottish nationalists after the disappointment of losing the independence referendum. It would also mean Red Ed having to swallow his pride if, as is likely, the Scots do snatch most of Labour’s seats north of the border (a YouGov/Times poll today predicts the SNP, which currently has six MPs, will depose 30 of Labour’s 41 Scottish MPs). 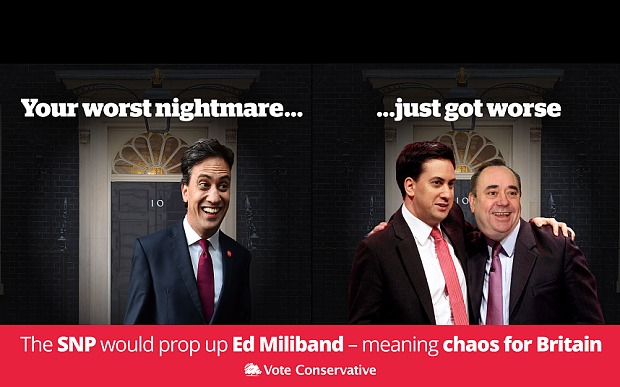 Expect to see more posters like this from the Tories.

But, like Boots boss Stefano Pessina, Buckley thinks Miliband could be bad for business. ‘A Labour victory could mean slower austerity alongside higher taxes on top-rate earners & expensive homes – all of which could damage perceptions of the UK to overseas investors,’ he warned.

Miliband hit back at the Monaco-based Pessina yesterday, telling a group of young voters, ‘I don't think people in Britain are going to take kindly to being lectured by someone who's avoiding his taxes on how they should be voting at the UK General Election.’

On the other hand, like Pessina, and business groups including the CBI and IoD, Deutsche Bank is not a fan of the Tories’ plans for an EU referendum. Their austerity policies are no panacea either, Buckley said – ramping them up would ‘risk damaging growth in the near term, though we believe austerity will be good for growth in the longer-term.’

Investors are pretty much ‘stuck between a rock and a hard place,’ then, as Buckley put it. Don’t be surprised if more business leaders break their usual vows of silence to wade into the increasingly messy political mud.