I grew up in a very white, privileged, old-fashioned society in South Africa and went to a boarding school run by nuns. My father was a company director and my mother was the country’s most celebrated actress – so my main influences were business and the arts. I had two brothers and my parents expected us all to do well. They were wonderfully encouraging. I was always climbing trees or riding the wild donkeys that strayed down road but I never once heard them say ‘don’t do that’.

On picking a career:

My parents were amazingly tolerant. I went to drama school but soon realised I was terrible at acting, so I ditched drama school for art school. I remember the director of the art school telling me: ‘You should give up now – you have absolutely no talent.’ Of course you’re not allowed to say things like that these days but it was very useful; it stopped me from wasting years on a failing trajectory. Next, I decided I wanted to be an architect. That didn’t last long either as I was no good at maths. In the end, I persuaded my father that I should go to Paris to learn French. It was there I discovered a love for food.

I’d been brought up in a society which didn’t talk about sex, food, money, religion or politics. Those things were all deemed slightly rude. (God knows what they did talk about.)  I could have learned to cook at our Zulu cook’s apron strings but no-one ever thought a white young woman would end up in the kitchen. You just never saw that. In France, everyone talked about food. I thought ‘I’ll be a cook’. That’s the profession that stuck.

On opening her own restaurant:

I opened Leith's in Notting Hill in 1969 and it eventually worked its way into being awarded a Michelin star. At the time, there were a few women running small bistros – but I was the first woman to have a ‘serious’, expensive restaurant. That got me an enormous amount of publicity which meant the restaurant was always packed with customers. I don’t even think I was that good. In fact, I’m quite ashamed when I look at old menus – they were so boring.

Even though Leith’s was always full, I was losing money. In retrospect, I really ought to have worked in a restaurant before actually owning one. I met Albert Roux and [wine legend] Joseph Berkmann at a cocktail party and asked them to come and help me. I remember Albert looking into our kitchen bin and saying ‘You’re either serving disgusting food or you’re giving customers far too much.’ He was shocked by the amount of waste. He pulled out a half-rotten apple and cut off the bad part – ‘This is the only bit you should throw away.’ Next he pulled out a bunch of watercress stalks – ‘Don’t throw those away, that’s where all the flavour is. Use this for soup.’ I had to learn incredibly fast. Men helped me because I was a novelty. And of course flirting always helps!

For the first 15 years or so of running a business, I had no desire whatsoever to get married or have kids. I didn’t feel broody until I was 35, and then it hit me like a hammer-blow. By the time I had my son, the business was paying me well so I could afford to take weekends off. That’s unusual in the catering trade. When you make the rules in business, you can suit yourself.

I remember winning the Veuve Cliquot Business Woman of the Year award in 1990 and there was a big feature on me in a newspaper. My son, who was 12 at the time, read it and said, ‘Mum, you can’t possibly run a business that employs 500 people. You’re always here!’ That was one of my proudest moments; I’d managed to run a business and be there for my son. I’d fooled him!

Because Leith’s was a success, I started to be invited on to other people’s boards. I was so flattered I almost always said ‘yes’, even though I knew that the chief reason for the invitation was probably that the chairman needed a woman on his board for appearance’s sake. So I first joined the British Railways board, and then a whole slew of top boards, among them Safeway, Halifax, Whitbread and Woolworth and Belmond [formerly Orient-Express] hotels. Tokenism doesn’t bother me. I didn't care what the motivations were; just as long as, once I'd got my foot in the door, they let me do the job. I love business and I worked hard, but I was lucky too.

I remarried a year ago. When you fall in love, it doesn’t matter whether you’re 17 or 70, you go through those same emotions – the hammering heart, looking at the phone and willing it to ring. My husband John is ideal for me. He’s not at all politically correct but, fundamentally, he’s tolerant, generous and interested in everyone and everything. He’s also very funny and a thoroughly good egg. We have a lot of fun together.

My mother had a boob job when she was 70. And she got the biggest job of her theatrical career when she was 72. Someone once gave me a cushion with the expression ‘Age is a matter of mind. If you don’t mind, it doesn’t matter’ on it. I love that. That’s my motto.

I was utterly mortified. I was such an idiot. My brother Jamie calls me Mersey Mouth because, he says, I’ve a mouth as wide as the Mersey tunnel and I’m hopelessly indiscreet. Thankfully everyone was very sweet about the whole ordeal.

We interviewed Prue Leith at MT’s Inspiring Women conference in November. Join us at our next event in Edinburgh on 15th May 2018 – International Women’s Day. Keynote speakers include Dame Cilla Snowball, the most powerful woman in advertising; and the CEO of Duncan Taylor Scotch Whisky, Moji Shand. Book your tickets here. 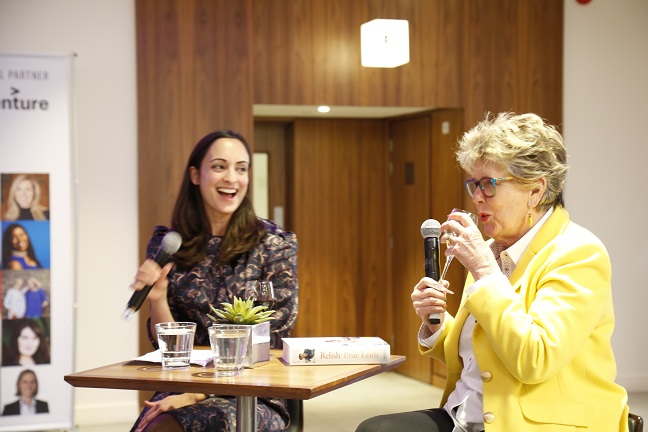 You can also read Prue's updated memoir Relish: My life on a plate