Buying a stamp at the post office used to be simple. You queued (and queued) and finally made it to the counter. Now, at my local branch there's a fiendish self-service machine. 'I preferred it the old way,' the frazzled clerk told me, as he corrected customers' problems. 'It took less time, was less complicated, and I could sit down.'

Well, you and me both pal - and most of the country. Recent research shows that some 60% prefer to visit a till staffed by a real person rather than one of the UK's 42,000 self-service checkouts. Rueful jokes about 'unexpected items' and 'bagging areas' permeate public life. The Daily Mail is currently running a campaign against self-service tills, harnessing all the outrage that's fit to print. It's likely to get worse. By 2017, tech research consultancy Gartner reckons that two-thirds of 'customer service interactions' will occur without human-to-human contact. The key problem is that it makes us do the heavy lifting, which is why American academic Craig Lambert has just published a book on the subject called Shadow Work: The Unpaid, Unseen Jobs That Fill Your Day. 'I define shadow work as the unpaid jobs that we're all doing: not just in supermarkets, but also in schools, hospitals, tax offices, airlines; pretty well everywhere,' says Lambert. 'They used to be done by employees. Now they're done by us.'

Lambert's eureka moment came at his local supermarket. 'So, it's 2011 and I'm waiting in line,' he explains. 'I see an attorney that I know is on $300,000 plus. She's swiping her own groceries and getting nothing for it. Not even minimum wage.' 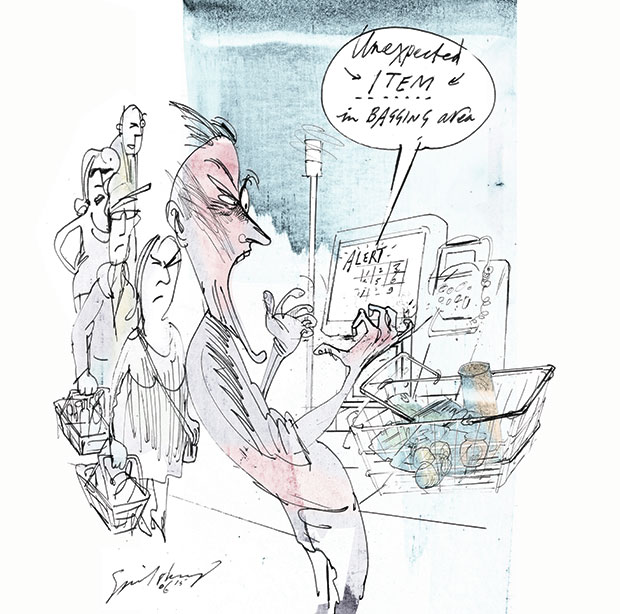 Following this bagging-area epiphany, Lambert came up with the concept of 'shadow work' - the graft we increasingly put in to access products we pay for ourselves. 'Travel is particularly acute,' he says. 'We used to use an agent. Now we do it ourselves on sites like Expedia and KAYAK. With IKEA, we build our own furniture. We write our own leases, wills, contracts, and just pay a lawyer to sign them.' We even do medical work ourselves. 'I know someone who diagnoses himself then uses the physician for a second opinion.'

Even within organisations, Lambert notes a serious aspect of shadow work in the decline of the assistant. 'Only really top executives get an assistant or secretary these days,' he says. 'Most do their own letter-writing, photocopying, label printing.' Support staff have become 'a quaint, historical curiosity like typewriters, stenography and executive washrooms - and only the elite get personal service.'

True, there's a strengths and weaknesses debate to be had. Salad bars, for example. 'Is it better to customise your own meal or have it made for you? Many prefer the former.' We're gaining skills, of sorts. But anti-social factors detract from the gains. Years ago, people pumped petrol for you; possibly even wiped your windscreen. 'And meanwhile, you would have talked to your husband, wife or friend during that time,' says Lambert. 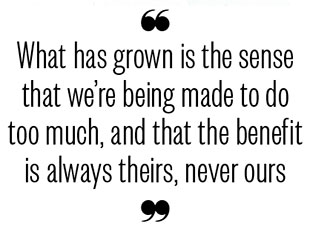 So unpaid labour blurs the distinction between leisure and work time, reduces social capital, even making an impact on ambition. 'A lot of the jobs shadow work erases are entry points to the labour force prior to getting promoted,' says Lambert. 'My father was a messenger at a bank and after 27 years became the president.' Could shadow work yet destroy the American dream?

The fear of automation replacing humans with machines has been a worry for centuries, at least since the Industrial Revolution. And while concerns are currently acute, retail self-service is actually almost a century old, starting when Memphis grocery shop Piggly Wiggly set up as 'self-service' in 1916. Meanwhile in the UK, Co-operative stores - where you served yourself - started to arrive during the Second World War.

Professor Leigh Sparks of the University of Stirling's Institute for Retail Studies says that self-service has long been the price to gain cheaper goods. 'They pose a question,' he says. 'What do you prefer: your money or your time?' To take an example, it might cost 5p more a litre to have an attendant pump petrol into your car. As retail psychologist Paul Buckley says, 'People expect low prices and mostly, the sum saved outweighs the service.'

Sparks believes we should understand the cost of service. 'But what has grown is the sense that we're being made to do too much, and that the benefit is always theirs, never ours,' he says. 'Too often we ask: "What am I getting back from this?" Self-service needs to benefit the consumer more obviously.' Right now, it doesn't, and we're going through a transitional period where it is all stick, no carrot.

Moreover, the self-service concept evokes older arguments about the division of labour, and that we're being forced to swap human contact for a scary, alienated world where production is divorced from consumption. Conversely, some have said that it makes us more equal, as the robot only sees our money.

Do people actually care? 'It's consistently shown that older people will avoid robot checkouts while younger people often prefer automation,' says Lambert. Are they alienated? 'No. They're just better at self-service.' Indeed, 20% of Millennials in a recent survey by US data firm Retale preferred not to interact with cashiers at all.

'It's observational,' says Leigh Sparks, 'but I see a lot of younger males go self- service. It seems to suit that group.' There may yet be a growing mood of willing people-avoidance. Lambert was recently amused to see an ad for a US delivery service called GrubHub. 'It said: "Everything great about eating, combined with everything great about not talking to people."' 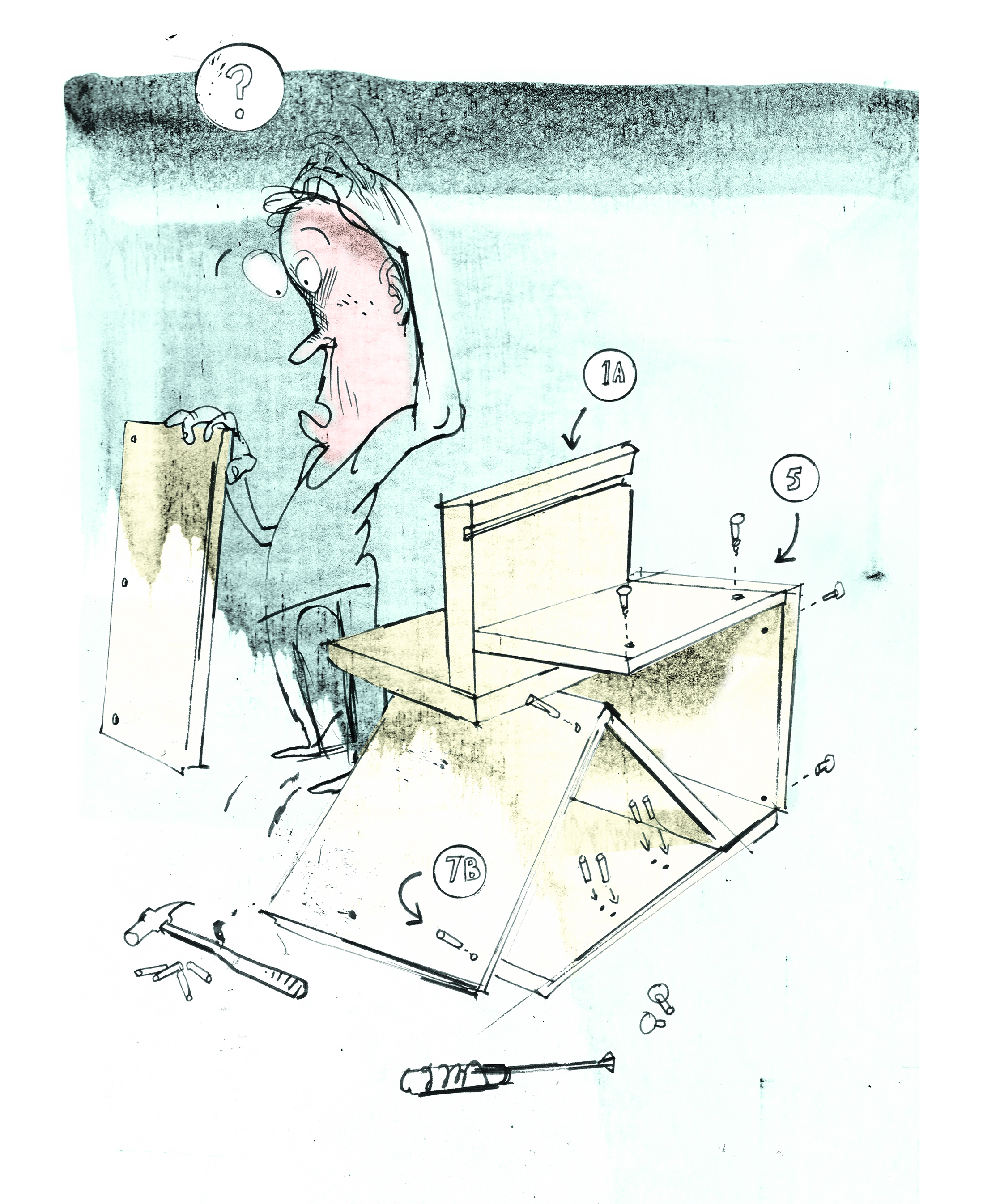 But all seem to agree that self-service adds to the daily angst. 'It was thought that stress was caused by major life events,' says Paul Buckley. 'But more recently psychologists like Richard Lazarus have shown that most stress is caused by daily hassles like self-service.' It contributes to the noise and acceleration of life, and impatience increases with speed.

Recently while planning a holiday to Iceland, I went online to easyJet, a car-hire firm and three different hotels, calculating distances and driving times to create an itinerary. I then printed off our boarding passes before setting off. All of that probably took eight to 10 hours of my unpaid time.

And that's another factor of the self-service 'revolution': the 'time is money' factor and the opportunity cost. 'I took a holiday to the Caribbean and rather than spend 10 hours in research, I paid an agent $75 for a holiday costing $3,000,' says Lambert. 'I was so happy to delegate it.' A tranche of micro-concierge start-ups - Magic, Helpa, GoButler, Hipmunk - seem to underscore this growing market.

Meanwhile, we shouldn't forget the power of trade access. 'Travel agents don't use Expedia and KAYAK,' says Lambert. 'They use a service that carries an annual fee, but which has an inventory of seats at trade prices.' Self-serve can also be riskier. 'When people DIY their bookings, they have no-one to call,' says Julie Croucher of agency Travel with Jules. 'Plus, they don't know that their prices are rarely the "final" price.' With ticket vending machines on the UK's rail network, we may be nudged into worse deals. 'Lots of people waste time trying to save money,' says Adam Knights, director of travel management group ATPI.

There's another key aspect of shadow work in the 'shared economy'. Professor Michael Beverland, director of Bath University's Centre for Research in Advertising and Consumption, is sceptical. 'Their dirty secret is that they transfer work from the firm to us,' he says. 'eBay makes us do lots of work - sellers must act like genuine shops, consumers must rate performance. I've been asked multiple times to write TripAdvisor reviews. If I don't, TripAdvisor has less value so it tells me how important I am, rewards me with a star. But they gain the true economic value of my labour.' The moral is: watch out for anything with the word 'community' in it. So we're on our own: alienated, bewildered and therefore more likely to be promiscuous. A 2013 Mintel survey showing that 74% of consumers would change brands based on a poor customer experience comes as no surprise to Beverland, who sees a gaping hole in the self-service experience. 'There's a ton of research highlighting that humans enhance the consumer-brand connection,' he says. 'We know that consumers often connect to brands indirectly through people, particularly in services such as retail.' 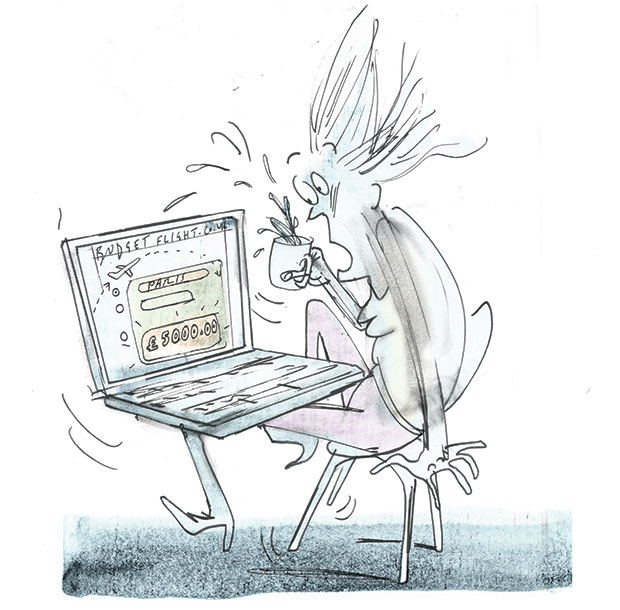 Remove that connection and you diminish the strength and value of a brand, which is 'short-sighted as it shifts people's perception of the product to being about price, or location'. Loyalty shrinks; people move on. 'And when they shift, they think about the bad things associated with self-service: job losses, exploiting local communities.'

A year ago, 80s electro-popster Marc Almond tweeted that he hated self-service machines, as they destroy jobs. Fine, although the same could be said of his synthesizers, destroying whole orchestras. But his point, although popular, is difficult to prove. 'Your instinct is to say it takes away jobs, in self-service supermarkets,' says a spokesman for USDAW, the retail union. 'We can't say. We lack hard numbers.' A greater problem, adds the spokesman, is 'till rage'. 'We hear a lot about customers taking it out on staff because of frustration with self-service.'

Indeed, it isn't necessarily faster. 'People get held up because there's no discretion with a robot,' says Lambert. A shop assistant might let you off a penny to move things along. There's also a greater incidence of shoplifting. Some will recall celebrity chef Antony Worrall Thompson's downfall, after he was busted in 2012, sneaking wine and cheese past self-service tills in Tesco.

Last year, I bought a gift in France. The assistant took about five minutes to pack it, scoring ribbons, taping it with a quaint label. It was highly fulfilling. Then again, I've been in Sweden at a clothes shop where the gift-wrapping service was provided by customers wielding shears, and I've also bought lunch from vending machines in Japan.

There are different norms in different countries, partly due to the availability of labour but also to levels of individualism. 'In Brazil there's a huge pool of low-cost labour so you don't see much self-service,' says Lambert. In India, it's regarded as positively rude to serve yourself - you're seen as taking labour from someone: the tea maker, pourer, carrier.

So the idea stands or falls depending on how self-reliant we are, and how socially acceptable it is. It's salutary that some companies are now reverting to humans. Morrisons is bringing back more than 1,000 staffed express checkouts, Tesco has put people back on tills. Lambert adds that at least two US supermarkets have gone back to the human touch.

But Lambert doesn't think this is typical. 'In 10 years' time, it'll be worse,' he says. There'll be resistance, innovation and new ways to keep self-service customers warm. In your local supermarket, just maybe, there'll be a hologram who always remembers your name. 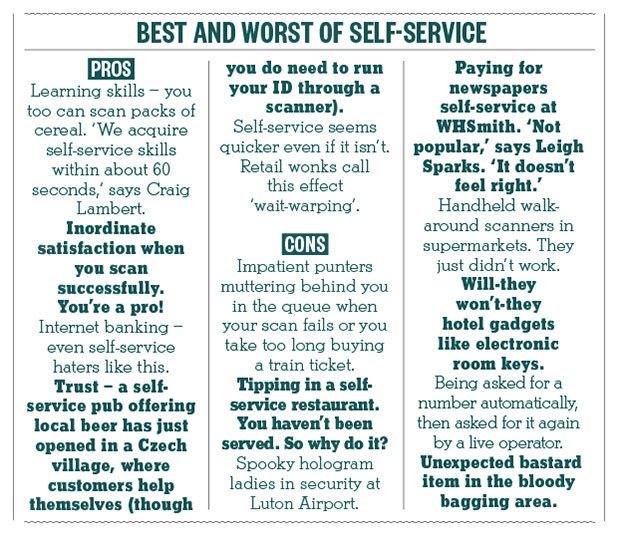