I always travel light. The sight of people on public transport with ginormous cases that appear to weigh more than they do makes me wince, so no matter how far I’m travelling or for how long I’ll be going for I never take anything bulkier than a wheely suitcase or a big backpack. I’d sooner spend some time doing laundry than face rush hour on the Piccadilly Line with a 30kg beast.

But those who are always determined to take everything and the kitchen sink with them when they jet off to foreign climes could find their lives a lot simpler in the future thanks to a new start-up called Portr. For as little as £25, the company's Airportr service will collect your bag from your hotel or home and drop it off at a kiosk in departures, leaving you free to spend your day as you please without having to drag around a big suitcase with you. And from this week for British Airways flights out of London it can even check the bag in for you – so you don’t have to worry about it again until you reach the baggage carousel at the end of your journey.

The service was dreamed up by Randel Darby, formerly a jet set private equity exec who grew tired of going everywhere with a bag in tow. ‘It slows you down immensely and is a huge inconvenience – you’re on and off the tube with your bag, taking it to meetings with you,’ he tells MT. ‘I thought there’s got to be a better way to do this.’ So he set about investigating the feasibility of a bag delivery service.

Coming from an investment background helped. ‘It gave me a passion for working with early stage and growth companies and I always thought if ever I have an idea, one of those lightbulb moments, then I’m going to do something about it.’ He developed the business plan in his free time, eventually linking up with his co-founders Darren Payne, who used to work for BAA, and marketeer Chris Walsh.

They started out with a proof of concept at London City Airport. ‘Lots of people were looking at what we were proposing to do and it hadn’t been done before and there were all kinds of concerns from commercial partners about reliability, security – because taking unattended bags into an airport was something we had to persuade people was a good idea,’ Darby says. ‘And also we had to demonstrate we could build a business.’ But after a year the trial was running smoothly and towards the end of 2015 they had signed up Heathrow and Gatwick too. Though he’s not disclosing revenues yet, Darby says the company is couriering ‘a reasonably high number of thousands’ of bags each month.

With all its security implications the company’s new bag check in service has been more complex to set up. Normally when you drop off a bag at the airport you have to queue up, have your passport checked and tell the airline worker that yes, you did pack the bag yourself and no, nobody gave you anything bomb-shaped to carry on board with you.  With Portr’s new service the company’s driver has to do all of this verification at the door before packing the cases into tamper-proof bags which will be screened by Portr before going through the normal security checks at the airport. 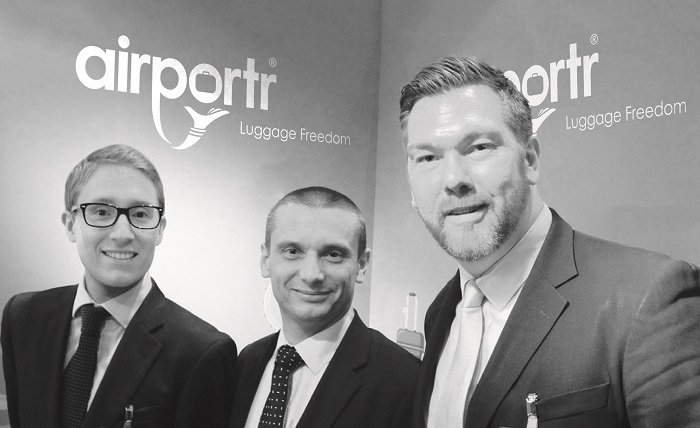 Darby’s network of contacts came in handy for raising cash, and over the past year the company has managed to drum up a £6.3m ‘series A’ round to launch its new service. ‘I had a pre-existing contact base of people that were willing to back me when I turned around and said "I’m going to get out of this world but I’m starting a business".’

At the moment the service is only available at some addresses in London and Darby isn’t sure it’s something that would be viable for those living far outside a big city – not least because they’re more likely to travel to the airport by car, negating the need for it. But he’s looking at other cities and is keen to tap new partner BA’s global network. ‘If I work with BA here in London I can go to another city, say New York, and BA will have a large business established there already.’

So will it catch on? For somebody catching a £30 Ryanair flight to Dublin it might seem like a frivolous extra but it’s easy to see how somebody forking out £900 for a jaunt to Tokyo or Sao Paolo wouldn’t bat an eyelid at paying for a little extra convenience. It might even convince me to ditch the rucksack for an obnoxiously big trunk.

"Why I took my company public at an early stage"

How payroll can drive growth post-Covid

It’s often undervalued, but payroll has the potential to provide invaluable data for businesses.

How to manage conflict in a cognitively diverse team

We all value different perspectives, but what if they clash?

Why this CEO banned emails from internal comms

By Stephen Jones
37 hours ago
Women in Business