Innovation is more than just a buzzword. It's the lifeblood of our economy. It's also more than just flashy product launches and 'visionary leaders'. Real innovation takes grit, perseverance and a little bit of luck.

MT has teamed up with London Business School’s Deloitte Institute of Innovation and Entrepreneurship to celebrate the companies and people that are truly disrupting their markets, with the Real Innovation Awards 2016.

The awards will be judged by a host of experts in the field of innovation: Luis Cilimingras, managing director at Ideo UK; Vimi Grewal-Carr, managing partner at Deloitte Consulting; Tim Brooks, CEO of BMJ; Charlie Dawson, partner at The Foundation; Kathryn Parsons, co-founder/co-CEO of Decoded and Julian Birkinshaw, director of the Deloitte Institute of Innovation and Entrepreneurship. And also MT’s editor, Matthew Gwyther.

‘Innovation is not something that just happens,’ says Grewal-Carr. ‘It comes from freedom to experiment (and fail) coupled with real determination and commitment. I am delighted to be a part of the Real Innovation Awards - a celebration of the diverse skills, hard work and sheer persistence needed to make innovation a success.’

The If At First You Don’t Succeed Award

This celebrates an individual or organisation who tried something that didn’t work out – but which provided the stepping-stone for a subsequently successful outcome.

The Masters of Reinvention Award

This award is for the organisation that most successfully reinvented itself when faced with a major challenge to its previously-successful business model.

This award is for the company that moved quickly to dominate an emerging market category, typically with a different and better business model than the first mover.

For an individual who has shown enormous tenacity and stubbornness in pursuing an idea, despite the difficulties encountered along the way.

For a person or organisation that built a thriving business on an idea that originated in the most unexpected or surprising way.

The Harnessing the Winds of Change Award

For those who spot what’s just around the corner soon enough to take advantage of it. 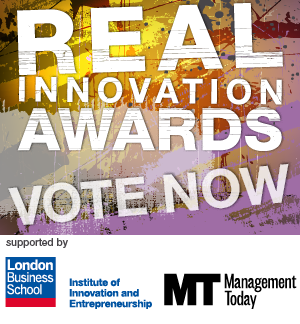