If you pick up a newspaper in the UK on any given day of the week you'll likely be able to find an article describing ‘research’ or ‘studies’. What naive readers may not realise is that much of what is reported as scientific is not in fact genuine research at all, but dishonest marketing concocted by PR firms.

An underground industry exists that fuels the British press with ready-written news stories, often based on surveys that are rigged to deliver answers that result in clickbait headlines. The most prolific company in the business is OnePoll who pay their members 10p per survey with a minimum payout of £40, meaning that their members have to complete four hundred surveys before they can claim any money. It's not hard to imagine how this could make the survey participants just a little button-happy, but that's just the beginning of the story.

A look at some of the PR surveys that recently appeared in the Management Today inbox revealed a hefty spattering of dubious findings, such as ‘20% of people believe that smoking has improved their job/career opportunities’. This claim was made by a PR company hired by an E-cigarette manufacturer, who commissioned a survey from, you guessed it, OnePoll — a company that has become so prolific that their surveys typically result in three stories per day in the British press according to Michael Marshall of the Bad PR blog which tracks news stories based on ‘research’ conducted by PR firms.

Marshall has come up with a straightforward way of debunking PR-manufactured headlines, by posting blog posts using a simple formula that links the headline claim to the company that funded the survey. One example is: ‘People today really hate how they look!’ says plastic surgery firm - which is a far more accurate description of a Daily Mail article titled: ‘Insecure Britain: A quarter of us NEVER feel good about ourselves... and weight, parenting and bills are the biggest factors bringing us down’.

In another article headlined, ‘Are you a real man? The top 50 things every chap should know,’ this time in the Telegraph, readers are informed real men should know the words to the national anthem, which way is North and the football scores from the previous weekend. This obviously wasn't real research either, but a survey commissioned by a betting shop.

How do companies such as OnePoll obtain such consistently scandalous, clickbait-friendly results? One favourite technique is the forced choice. For example, questions such as, ‘Who do you prefer to work for, men or women?’ where the only answers possible are ‘men’ or ‘women’. The logical responses - ‘I don't discriminate’ or ‘I don't know’ are not options — and respondents are forced to choose in order to claim their precious 10p reward.

A leading question in the same survey asks, ‘If you prefer to work for a man, why do you think women make bad bosses?’ with answers including ‘no time of the month’ and ‘easier to reason with’. Therefore whatever the survey result, the PR firm has a juicy headline to get their client's name into the papers followed by ridiculous, fabricated, pre-determined justifications for the nonsense headline. This is precisely how the Daily Mail's headline: ‘Men are the best bosses: Women at the top are just too moody (and it's women themselves who say so)’ was made. The story also featured in The Guardian, The BBC, on Five Live, The Wright Stuff and Loose Women. The somewhat less headline-worthy truth of the matter was never given a chance. That clearly wasn't the objective of the recruitment agency that funded the sexist survey.

Only last week, Management Today received an email from a PR firm claiming: ‘Women really can concentrate for longer than men’. You can likely expect this story to appear over the coming days or weeks in the British gutter press. How did the PR firm, commissioned by a serviced office provider of all companies, come to this conclusion? Did they run a controlled test of men and women's concentration levels? No, of course not. The pollsters simply ran a survey asking men and women how long they thought they could concentrate for. 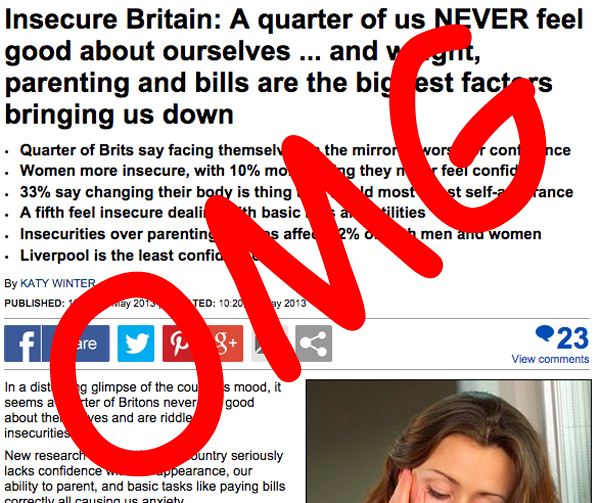 Daily Mail fails are all too common

This certainly wouldn't be the first time this brand of utterly nonsensical news story made it to press. The Sun once ran a news story on the size of Jeremy Clarkson's penis using the very same rationale - asking random strangers on the internet to take a guess. The story made the front page of the Daily Star; the survey was commissioned by a sex site. This form of misinformation is obvious to even the least discerning reader, but promoting nonsense claims about things as meaningful as gender differences in concentration risks calling into question the validity of important real research. This contributes to an apparently growing and potentially disastrous belief that facts and hard evidence are really just someone's opinion.

The motivation for these headlines is clear: the stories provide the chance to get a company's name into the press, resulting in free advertising regardless of the consequences. Journalists desperate to provide copy in an increasingly cutthroat news industry are easy prey, albeit prey that almost certainly knows what it’s doing. The costs to business, however, are less obvious.

The constant stream of misleading PR ‘news’ stories that has infected the British media misleads the public, contributing to distrust of scientists and skewed, misinformed views about basic facts of life. But with the growth of social media, people now have a way to fight back. Blogs such as Marshall's name and shame companies responsible for nonsense news stories, making the companies financing the stories the real laughing stock.

Stories that might have once merely raised the eyebrow of your average Daily Star reader, now become the butt of jokes on Twitter and blogs such as Marshall's, where the company responsible can now expect to have their name dragged through the mud. Fans of hit TV show Family Guy, for example, may well be both horrified and baffled to learn that to promote a new season of the series, 20th Century Fox commissioned a survey that resulted in the Daily Mail headline: ‘Four in ten ‘feuding with their family' with women blamed for starting trouble’. Thankfully the survey is nonsense, but I for one will be less likely to tune in after the bitter taste left in my mouth by Fox's misogynistic attempt at self-promotion.

Such tactics may seem at first glance like a cheap way to advertise your company, but before you hand a questionable PR firm a chunk of your advertising budget, take a moment to think about the hidden consequences of these activities. Do you really want to be responsible for distorting the views of the population, while furthering an agenda you probably don’t even agree with? Do you really want the name of your company associated with pushers of cheap, shameless, misogynistic misinformation?

In today's knowledge economy, trust is increasingly important and, in a world dominated by social media, increasingly fragile. This was powerfully demonstrated by the speed and scale of the fallout from the Justine Sacco incident. Prior to boarding a flight to South Africa, the senior PR exec posted a racist tweet. By the time her plane had landed, her life was in tatters and her company's name was in newspapers around the world for all of the wrong reasons. The incident demonstrates the power of social media to create a rapid backlash against immoral, or just ill-considered, actions of individuals and organisations.

A company immediately loses its credibility when it sells itself out to PR firms who are willing to abandon their ethics. Wouldn't it be ironic if the next PR scandal was not just a company's own making, but where the company paid top dollar for the privilege? Don't let it happen to you.