The first time a mortar bomb narrowly missed Louai Al Roumani he froze for ten minutes and couldn’t say a word. The second time left him reeling for five minutes, but able to speak a word or two.

The gradual improvement in his ability to cope and the change of perspective each blast brought would be mirrored multiple times in multiple contexts during his personal and professional life running Syria’s largest independent retail bank during the country’s long civil war - an experience he has documented in his memoir Lessons from a Warzone.

Headcount was constantly changing, employees were leaving the country, some were joining the army, and a tiny minority were trying to blackmail the bank. Yet the BBSF was not only able to remain afloat where others didn’t, it was able to improve its liquidity ratio.

Al Roumani (pictured below) who now lives in London and works for Unicef, says it was the cumulative ability of the executive team to adapt to many small changes, rather than a single radical change, that helped the bank through. It also took some very shrewd and empathetic decision making. 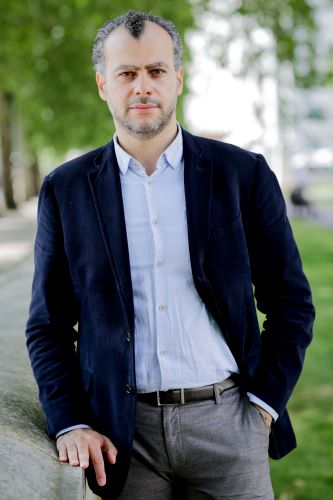 The only real similarities between your experience and what business leaders are currently going through is the uncertainty - can you ever prepare for that?

“Initially when the war first started we were in a room asking questions like ‘when will the war end?’ or ‘how do you think this will turn out?’ - Things we had very little control over. Over time I think we noticed that maybe this was a flawed approach.

“We were scenario planning and visualising many different kinds of warlike triggers. We really overdid it. We had a list of perhaps ten different potential scenarios, but missed a much more mundane one; a snowstorm, which really did affect our ability to operate.

“We came to the conclusion that you can plan and plan but then things will happen that you really didn’t think of. We shifted our mindset to focus on visualising the actual triggers of a crisis rather than analysing their impact. Then it was learning to embed some operational flexibility and ensure that every single branch had the ability to close up and safeguard our staff within an hour. Somewhere that was safe one day could soon become the epicentre of the fighting.

“Initially we were driven by a feeling of needing to be very efficient, but as the war wore on we realised we actually needed a lot more buffers and to have more alternatives available instead of becoming leaner."

How did you as a leadership team attempt to manage other people’s anxieties?

“In a crisis people expect certain things to be done. They know you’re in distress, that the organisation is probably doing worse and they expect you to cut costs. We knew that doing things that we viewed as small could be amplified in their view so we resisted. We didn't cut wages.

“We had the branches in Raqqa [the city that became the capital for ISIS], so we moved all of our staff and their families from there to different cities.

“Basic needs need to be met - if not exceeded. It is not enough to ask people to continue working in hotspots and then talk about the importance of mental health or offer benefits that have little substance.

“Secondly, when employees saw that we continued to seek opportunities while other banks were clamping down on deposits and therefore becoming less strategically important, they came to see us in a better light and actually started trusting us a lot more.”

It might sound like an obvious question, but how important is it to show that you care?

“I would rather not talk at all, just act. They say talk is cheap; when change becomes harder to affect, talk is cheaper. In normal times people may be more tolerant of your actions. People become better at detecting bullshit when there is more at stake.”

[BBSF laid on private buses for its own and other banks' staff to get to work when public transport started to become more dangerous.]

They say that people remember what you do in a crisis...

“Three of the four words in the bank's name belong to the founder who abandoned us at the start of the war. We thought we’d be facing an identity crisis as well as all the problems from the conflict. But we realised that clients didn’t really care what our name was - what we did mattered more. It was better to have an irrelevant name but actually have cash to give our clients.

“Don’t try to outsmart people in a crisis. We were not sociologists but we knew that people would panic, we took a bet to try and accommodate that fear."

[When other banks started limited deposits BBSF didn’t and in some cases even displayed bank notes on the counter to demonstrate its liquidity.]

“Maybe we exaggerated it a bit, but we wanted to symbolise that we were there for our customers. Three months later people ended up bringing their money back, and clients started moving to us from other banks that had tried to outsmart them. What you do defines you, more than what you say or branding exercises.”

Personally how did you cope with the pressure?

“I concede that yes, things were very tough in Syria. But actually in that context I feel like I was very lucky and blessed. I was living in one of the safest areas in Damascus and I had the privilege of being able to check into a hotel where others had their villages wiped out.

“A second thing is that people crave normalcy during a crisis. Yes my life was interrupted, but that’s no less of a reason to want to work more or make sure that you’re enjoying your time even more than before.”

Avoid a half hearted approach: “Taking a full hearted approach doesn’t mean you’re being reckless. You need to recognise that this is a novel experience, things will need to be done and may need to be changed. But commit to something if you decide to do it. If it turns out to be wrong, U-turn.”

Don’t get drawn into negativity: “Taking a defeatist tone can be challenging. Recognise the colossal challenges of the crisis but don't let it wash away every shred of positivity.”

Sometimes you need to be ruthless: “There's no contradiction between being honourable and generous and being ruthless. We had individual employees trying to blackmail us, some stole from us. If you let people hurt you then that could affect the wellbeing of your other staff and stakeholders.”