While keen-eyed shoppers dart between the stores of Dublin’s Grafton Street before they close for the evening, students are already packing the city’s pubs, celebrating graduation with a pint of Guinness and the odd Jagerbomb.

And so they may. Ireland is rising again. It’s now the fastest growing economy in Europe, with GDP increasing 4.9% in 2014. Unemployment fell to 9.8% in May, compared to 11.7% a year before, and new jobs are being announced all the time. For young graduates looking for prospects, Dublin is a place to be.

It isn’t just youthful exuberance. It’s tangible. High street businesses are starting to feel the change, not least in their tills.

‘It’s busy Sunday through Wednesday, but an office worker who just goes out on a Saturday night wouldn’t have noticed the difference,’ says Aisling Kenny, who works in the Dean, a hip hotel and restaurant near the city centre.

She lives in Dublin, but is originally from Galway in the west of Ireland. ‘I was back there the other week and had to book to get a table for a meal,’ Kenny says. ‘You know there’s a recovery when you have to book to get in anywhere in Galway.’

She hushes slightly whenever she refers to the recovery, as though if she says the word too loudly it will disappear like some phantasm. It's true there's been little cause for optimism in Ireland in recent times. It's still haunted by the ghost of its golden age, which died a horrible death eight years ago during the subprime crisis. 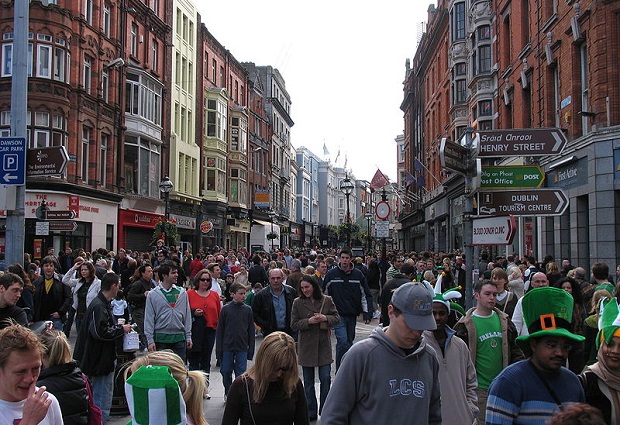 The streets of Dublin are getting busy again, as the recovery gathers pace.

Ireland had soared in the early years of the millennium, rising from the backwater to Europe's cutting edge, only to plummet like Icarus after flying too close to the Sun. Property prices fell by a third, the stock market lost over 80% of its value and unemployment more than doubled to an eventual peak of 15.1% in 2012. The national debt, meanwhile, exploded from 25% to 125% of GDP as the government bailed out or nationalised the country’s three biggest banks. It made Britain’s crash look like a little scuff on somebody's bumper.

It’s understandable then that any optimism that the Celtic Tiger is roaring again is tempered by a certain hesitance. People are all too aware of the lingering residue of what Taoiseach (prime minister) Enda Kenny calls Ireland’s ‘catastrophe’ to get carried away.

You can still drive to the ‘ghost estates’, property developments that were abandoned during the crisis before they were finished, and it’s hard to forget the ‘lost generation’, the hundreds of thousands of workers who fled the country in search of employment and who never came back.

That too, however, is changing. Public relations director Denise Duffy comes from Longford but has worked in London since before the crash. As a result, she didn’t experience Ireland’s recession first hand, though it was enough to make returning out of the question – until now. ‘It’s a lot more appealing. I thought of coming back a few years ago but there weren’t the opportunities. It seems like that’s changing.’

To find out why that is and to find the source of all this hesitant optimism, I popped down the road to the sparkling new headquarters of fast-growing US data insights company Qualtrics. It’s 27,000 sq ft of fresh glass and steel, complete with its own Irish pub, pool table and bean bags - there's nothing hesitant about it.

Smith started his billion dollar firm in a Utah basement 13 years ago. It’s now one of the fastest growing tech firms in the US. He opened its European HQ two years ago in Dublin with four staff. The new office has 100, with space for plenty more, and Smith intends on having 250 by the end of next year.

For a country of 3.5 million people, that’s a big deal, enough to draw the Taoiseach, his deputy (Tanaiste) Joan Burton and jobs minister Richard Bruton to the launch, where Smith presented them all with skateboards.

‘I had a board member who helped set up Google here,’ Smith says, explaining why he joined the 1,150 other non-European companies that have chosen Ireland as their base. ‘We asked who’d scaled big businesses recently in a cost effective way. We didn’t want to come into a new market with a new model – we wanted somewhere that was similar to Utah.’

He picked Dublin because it was like Utah? Presumably he’s not talking about Ireland’s 12.5% corporate tax rate, which is roughly a third of what businesses pay in that particular American state.

‘I don’t think that’s as big a deal for someone starting a business here than everyone makes it out to be. Even the Irish folks think we’re here for taxes,’ Smith says. ‘We don’t have a tax problem. I hope to create one, but we’re building our presence – I don’t care if it’s 100% taxes or 50%, if somewhere makes us more successful, that’s where we’d go.’

So it’s not even a secondary consideration?

‘No, no, no. Number one’s success. Number seven’s taxes, and there’s nothing in between.’

That may be true for firms growing in Ireland from scratch, but surely it’s a different ball game for big beasts like Apple or Google, which has been in the country since 2003 and now employs 3,000 people there.

Even for those firms, says Barry O’Dowd of the Irish Development Agency (IDA), there are matters bigger than tax. ‘The Irish are very good at straddling the communications divide between Europe and the US,’ O’Dowd says. ‘You often hear Ireland’s halfway between Berlin and Boston, but we’re really a lot closer to Boston than Berlin.’

Ireland also stands out as a destination for expanding foreign tech firms because of its strong base of middle and senior management. ‘They’re able to recruit from people who worked for companies like Oracle, Salesforce, IBM or Microsoft,’ O’Dowd says. The legacy of the Celtic Tiger days isn’t all bad, clearly. 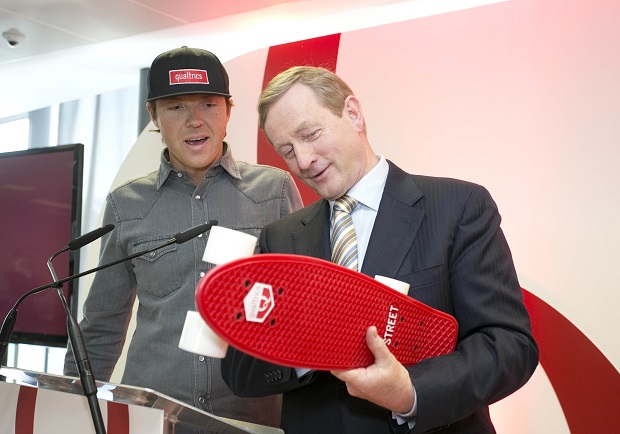 Smith identifies a few other assets that Ireland has, from the willingness of workers across Europe to move there to the professionalism of the Irish government and IDA (‘for some reason, governments so often do things that make it hard to do business’). But whatever the cause, foreign direct investment has undoubtedly dragged the country out of the mire.

Does that mean Ireland’s recovery is only as good as its ability to snare new investors? What if the well of big spending IT and biotech firms dries up?

‘Over the last four years we’ve seen 104,000 people back at work,’ replies Minister Bruton. ‘Less than 30,000 are in foreign-owned companies. There’s no doubt major investments like that kick started the recovery, but now it’s grown it’s widely and solidly based.’

So widely based, in fact, that it’s extending beyond Dublin to far more remote places. When questioned about the impact of all these hi-tech firms on, say, County Mayo (where only 30% of the 130,000 population live in urban areas), O’Dowd initially scratches his head.

‘Botox,’ he says eventually. ‘Westport in County Mayo is the global home of Botox.’ US multinational Allergan, which now has its global HQ in Dublin, opened its centre of excellence to develop therapeutic botox in Westport a few years ago, employing a thousand people there. A sign, albeit perhaps a fairly lonely one, that Dublin isn’t the sole beneficiary of the recovery.

Ireland may not rely on foreign direct investment for all its growth, but it is clearly a key ingredient, just as it was in the glory days of the 90s and early 2000s. The difference is that growth now isn’t also based on property price hysteria or bad banking. Yes, the importance of its tech sector and the size of its government debt leave Ireland perhaps a little more vulnerable than some other countries to another global crash, but it’s not exposed the way it was.

With the youngest population in Europe (the median age is just 34), Ireland’s adapting fast to the demands of the post-crisis economy. All those graduates now entering the workforce have a confidence that comes from not having lived through the spectacular rise and fall of the Celtic Tiger. The challenge for Ireland’s older people will be to make sure it never forgets.

Will Google regret its tougher approach to moonshots?

How to manage dyslexia in the workplace