A year-long study from the Living Wage Commission has called on the government to cut the number of low paid workers by one million to end the ‘national scandal’ of poverty. However, it has stopped short from asking the government to make it compulsory for firms to pay the living wage.

‘Working and still living in poverty is a national scandal,’ said the commission’s chairman Archbishop Sentamu. ‘For the first time, the majority of people in poverty in the UK are now in working households.

‘If the government now commits to making this hope a reality, we can take a major step towards ending the strain on all of our consciences. Low wages equals living in poverty.’

The commission said there are 5.2 million workers, equal to 21% of the workforce, paid below the living wage, an increase of 420,000 in the last year alone.

These are the areas the commission highlighted: 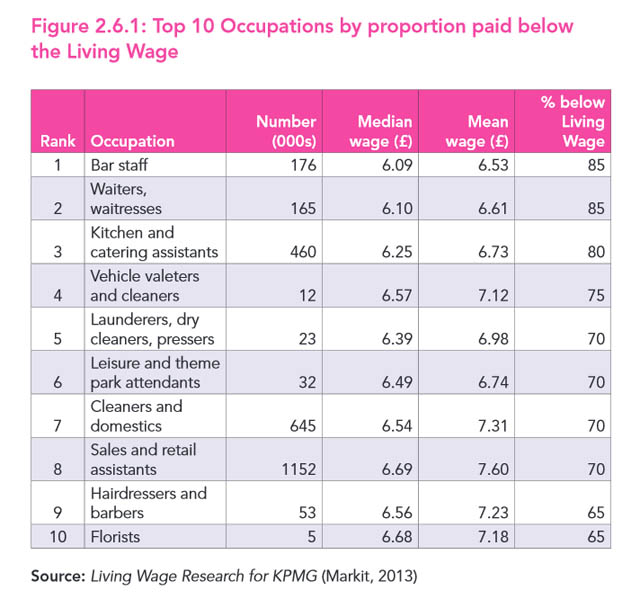 However, the commission is against the introduction of a compulsory living wage, warning that the increased wage bill would not be affordable for firms in some sectors, such as retail and hospitality, and for many small businesses.

The UK living wage rate currently stands at £7.65 an hour, and the London living wage is set at a higher rate of £8.80 per hour. However the national minimum wage is just £6.31.

There are currently 712 employers across the UK currently paying a living wage, defined as the minimum amount of money needed to enjoy a basic, but socially acceptable standard of living.

The commission said more should be encouraged to pay above the minimum wage and that the government should lead by example: increasing the pay of half 500,000 public sector workers to the living wage could be more than met by higher tax revenues, it said. In private firms, reduced in-work benefits could help a similar number of employees.

It also recommends that all publicly listed companies publish the number of people paid below a living wage.

Business lobby groups have responded by saying that companies should not be forced to increase minimum pay.

‘Some businesses simply cannot afford to pay a Living Wage just yet - which is why the Commission rejected a compulsory Living Wage,’ said Adam Marshall, director of policy and external affairs at the British Chambers of Commerce. ‘The task now is to support as many employers as possible to make this transition, because paying the Living Wage can benefit employers as well as their staff.’

Business Secretary Vince Cable added: ‘The Government supports businesses who voluntarily pay the Living Wage where it is affordable and doesn't cost jobs. Unlike the minimum wage, which is carefully set by the independent Low Pay Commission, the Living Wage does not take into account the effect rises in wages might have on the job opportunities of the lowest paid.’

Those against legislation say that although fighting poverty wages is a 'Good Thing' socially, the macroeconomics of doing so are tricky. If everyone on poverty wages now was paid the living wage from tomorrow, it's likely that inflation would rise and the poverty wage would have to increase to keep up with prices, which would push up inflation again and so on.

Meanwhile Tesco, as the UK's largest private sector employer, has been targeted by campaign group Share Action, which has put its own signs on the supermarket’s shelves. 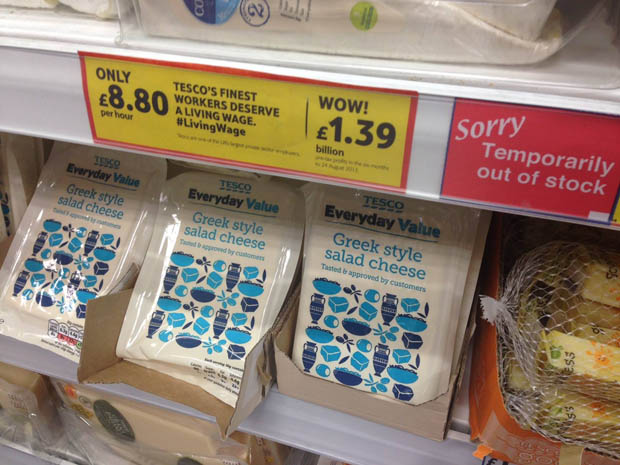 A Tesco spokesperson said: 'We pay one of the highest hourly rates in the industry, on average between five and eight per cent more than our major competitors. The Living Wage only recognises basic pay, but our reward package is much broader than that...All our staff receive above the living wage, both in London and in the rest of the UK.'