In an era of corporate scandals (Tesco, HSBC, pretty much any other bank you can think of, etc) Britain’s ‘most impressive businessperson’ is not the head of a FTSE blue chip, but billionaire Virgin founder Sir Richard Branson.

Old Beardy won the admiration of fellow ‘captains of industry’ for the third time in four years, despite his pie-in-the-sky space tourism venture Virgin Galactic struggling to take off (a test pilot was killed when SpaceShipTwo crashed in October).

Branson scored 19% of the vote, according to the Ipsos Mori survey of 108 executive directors and chairmen from some of the UK’s top companies. WPP boss Sir Martin Sorrell, who took third place in MT’s Britain’s Most Admired Leader awards last year, was second, followed by fellow knight Sir James Dyson. 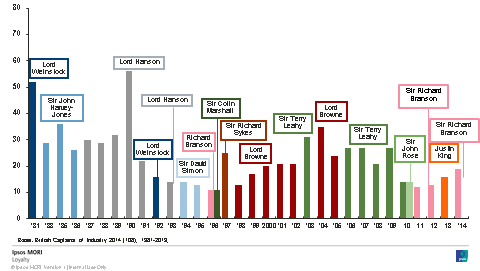 The most admired British company was John Lewis (not specified as the Partnership, which includes Waitrose, or just the department store), which also stormed the free vote in MT’s Britain’s Most Admired Companies (don’t say we didn’t tell you so…). It took 19% of the vote, trailed by Rolls Royce, currently embroiled in a Brazilian corruption scandal, with 8% and Virgin Group on 6%.

While companies aren’t exactly falling over themselves to emulate the Partnership’s model, they are queuing up to lavish it with praise. Businesspeople are, like everyone else, probably feeling the love for the department store’s Christmas ad star Monty the Penguin, but more importantly they seem to heartily approve of the values that appear to be so inherent in employee ownership.

In the depths of recession in 2008 only 35% said acting ‘with honesty and integrity’ was ‘extremely important’ when they judged a company or organisation This year 81% put it in that category, way ahead of quality of management, at 58%, and products or services and customer service at 50% each. Whether that will translate into fewer corporate meltdowns (or more saintly John Lewises) in the future remains very much to be seen.