Inspired by the Japanese art of origami, a team of engineers at Harvard and MIT have built a robot that can assemble itself into a complex shape in four minutes, and scuttle away without any human intervention.

'Getting a robot to assemble itself autonomously and actually perform a function has been a milestone we've been chasing for many years,' said Rob Wood, a Harvard University scientist on the team.

The breakthrough could eventually lead to affordable 'robotic helpers' for use in everything from household chores to exploring and collecting data in space. 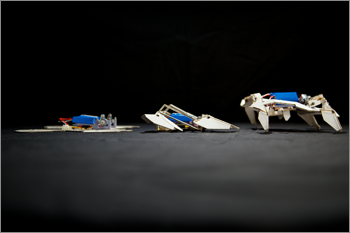 'Imagine a ream of dozens of robotic satellites sandwiched together so that they could be sent up to space and then assemble themselves remotely once they get there—they could take images, collect data, and more,' said Sam Felton, another member of the team.

The scientists hope that one day everyone could have access to a robotic helper for 'everyday house and porch sweeping to detecting gas leaks in the neighborhood' for as little as $100.

The robot prototype was inspired by the paper-folding art of origami, as well as by Shrinky Dinks - the children's toy which shrinks into shapes when heated. This approach allowed the team to avoid the traditional 'nuts and bolts' approach to assembling complex machines.

They started with a flat sheet, to which they added Shrinky Dink bits, two motors, two batteries, and a microcontroller — which acts like the robot's 'brain,' Felton said.

It also included hinges that were programmed to fold at specific angles. Each hinge contained embedded circuits that produce heat on command from the microcontroller. The heat triggers the composite to self-fold in a series of steps.

When the hinges cool after about four minutes, the robot becomes stiff — and the microncontroller then signals the robot to crawl away at a speed of about one-tenth of a mile per hour. The entire event consumed about the same energy as that contained in one AA alkaline battery.

'The days of big, rigid, robots that sit in place and carry out the same repetitive task day in and out are fading fast,' said Dr Don Ingber, the founding director of Harvard University's Wyss Institute.