It’s crunch time for Ukraine, after Russian state-owned gas firm Gazprom shut off supplies of gas to one of its biggest customers.

This is by no means a surprise: Russia has been threatening to do it pretty much since the first protestors started hinting that they might not be huge fans of Vladimir Putin. Gazprom claims Ukraine owes it $4.5bn for gas it’s already supplied – and now, according to Andriy Kobolyev, the head of Ukrainian state oil and gas company Naftogaz, it’s finally cut off the supply altogether.

Ukrainian prime minister Arseniy Yatseniuk is clearly miffed: ‘this is not about gas… this is part of the general plan of Russia to destroy Ukraine,’ he said at a cabinet meeting today. ‘We will not subsidise Russia’s Gazprom… Ukrainians will not pull $5bn out of their pockets a year so that Russia can use this money to buy arms, tanks and planes and bomb Ukrainian territory.’

You can understand his consternation: Ukraine reckons Russia nearly doubled its gas prices back in April, from $268.60 per thousand cubic metres, to $485. Yatseniuk said that if Russia could offer it a ‘fair’ price, Ukraine will be happy to cough up.

The good thing is that, according to Kobolyev, Ukraine currently has 14 billion cubic metres of gas stored up, which should last it until December. But what happens after that? Gazprom said from now on, Ukraine will have to pay up in advance because of ‘chronic non-payment’ of gas bills. If Yatseniuk is serious, that puts the two in a stalemate. And Ukrainian winters tend to be pretty uncomfortable without central heating to rely on…

The problem is that not only is Ukraine up to its eyeballs in debt, but that debt has increased massively over the last few years. Here’s a chart showing how repayments have leaped since the 1990s: 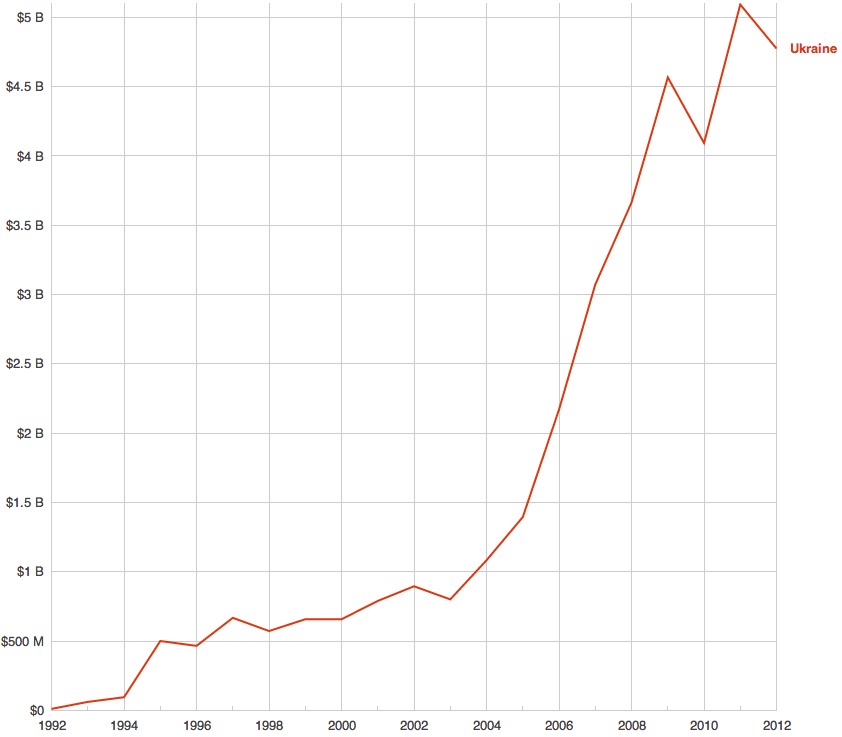 Europe had attempted to broker a deal whereby the Ukrainians would pay $1bn of what it owes immediately, with the rest paid off over the next year or so – but Russia turned it down.

The worry (from our point of view) is that when similar spats have taken place in the past, it’s disrupted the supply of gas to Europe (because most of it goes through Ukraine) and pushed up prices massively. For British consumers already struggling badly with the price of energy, that could spell disaster. Although Gazprom has promised to circumnavigate Ukraine if necessary. Obviously, the ideal solution would be for the two sides to settle their differences – but that might be too much to hope for.

THe long-term consequence, of course, is that if Russia keeps doing this, others will start to avoid buying off Russia. Playing politics with gas is a bad idea. Putin could be cutting his nose off to spite his face.