Russia is in the icy grip of an economic crisis and it’s hard to see how Putin and his cronies can wriggle out of this one, after an interest rate hike to 17% on Monday night failed to stem the rouble’s slide.

In fact, things just got worse for the Russian currency yesterday: it swung wildly between 58 for $1 (64p) and 79, ending the day at around 67. Russians rushed to buy value-retaining cars and Ikea kitchens before their prices rose even more and Apple stopped selling online last night, as it struggled to cope with the fluctuations.

‘I couldn’t imagine even a year ago that such a thing would happen — even in my worst nightmares,’ central bank deputy governor Sergey Shvetsov said yesterday, according to the FT - an unusually honest statement given the standard zip lip of monetary policymakers.

Today the rouble is a darn sight less volatile at between 67-68 to the dollar, after the central bank said it was starting to sell some of its $370bn dollar reserves. It officially announced today it had sold $1.96bn on Monday, but has probably shifted more in its efforts to calm the currency. 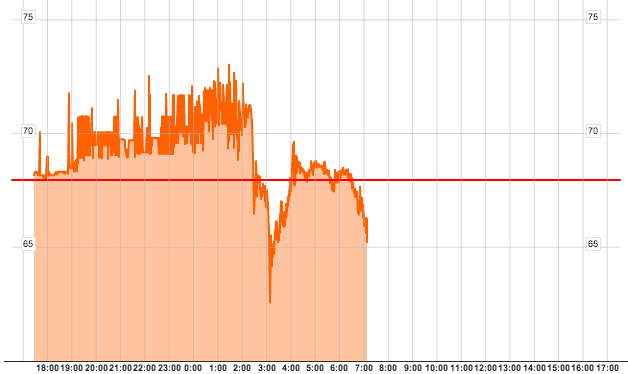 The rouble against the US dollar today (Eastern Time). Source: Bloomberg

A smidge more rouble stability isn’t really going to help in the long run, though. The currency has lost more than half its value this year, as Western sanctions over Russian meddling in Ukraine compounded the problems caused by tumbling oil prices - now less than $60 a barrel compared to around $100 at the start of 2014. 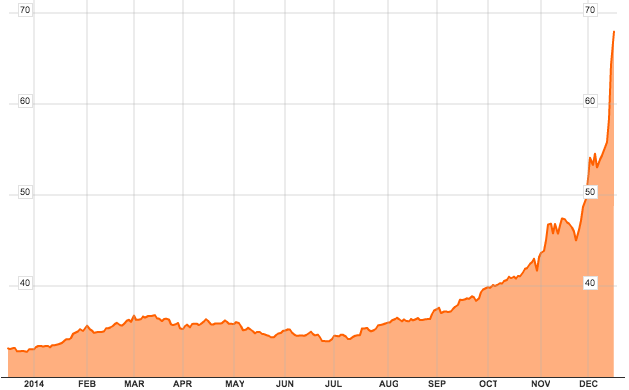 The rouble against the dollar over the last year. Source: Bloomberg

And that has really hit Russia where it hurts: oil and gas make up more than half of the Government’s budget and two-thirds of exports. Add to that that the country is, of course, hideously corrupt, unequal and that its working age population is shrinking faster than you can shot vodka and it’s an all round recipe for disaster - inflation has spiralled up to around 10% and the central bank has said the economy could shrink by 5% in 2015.

The most pressing issue was how on earth Russian companies are going to service the $700bn-odd foreign debt they owe, given that the plunging rouble has doubled the cost of doing so. State oil giant Rosneft has already begged for a $40bn-plus handout to weather the crisis and was helped by the central bank to issue a rouble denominated bond now worth around $7bn on Friday with an extremely low interest rate.

But today, with reports prices are being hiked left, right and centre, the possibility of inflation running out of control and a run on banks is also looming large. The phrases ‘sovereign default’ and ‘capital controls’ are on everyone’s lips, with the ghost of the country’s 1998 default casting a shadow. But Russian policymakers have strenuously denied they are considering the latter so far, a move which could only spur on capital flight rather than stopping it. A moratorium on foreign debt repayment would only make the country even more of a pariah on the international markets.

Even if the central bank and Government do figure out a way to stem the short-term crisis that doesn’t involve Soviet-style intervention, there’s no way out of its more systemic economic issues that doesn’t involve serious pain. But then again Putin doesn’t really seem to care much about his people - all his focus will be on propping up the oligarchs at Rosneft et al that keep him in power.

As Anthony Peters, a strategist at financial advisers SwissInvest put it, ‘Not since Soviet times have we seen such steadfast refusal by the Kremlin to acknowledge the presence of severe political and economic problems while sacrificing the people in the name of orthodoxy. The Russian people are legendarily stoic in the face of hardships but beware if, and when, their patience runs out.’