It looks like Michael O’Leary, the outspoken chief executive of Ryanair, has given up on his dreams of acquiring rival airline Aer Lingus. Ryanair announced this morning that it is prepared to sell its 29% stake in the company, after it failed at two attempts to increase its shareholding to 50.1%. O’Leary is so upset he couldn’t even make a statement, leaving a spokesperson to do it instead…

We last met our hero as he was hurling insults at the Competition Commission over Ryanair’s second almost-thwarted attempt at increasing its shareholding in Aer Lingus. Initial finings ahead of report by the competition authority (which won’t come out until later this month) had revealed concerns a merger between the two airlines could be problematic.

Now, O’Leary has apparently given into the commission, but there is a caveat. In this morning’s statement, Ryanair said that ‘in order to dispel the CC’s unfounded and invented "concern" that Ryanair’s shareholding may prevent Aer Lingus from being acquired by another EU airline, Ryanair will undertake to unconditionally sell its 29% shareholding to any other EU airline that makes an offer for Aer Lingus and obtains acceptances from 50.1% of Aer Lingus shareholders.’

There's a good chance the CC would have forced a sale in September, probably at a lower price: this just makes it more expensive for rival airlines to buy it. Your round, O’Leary. 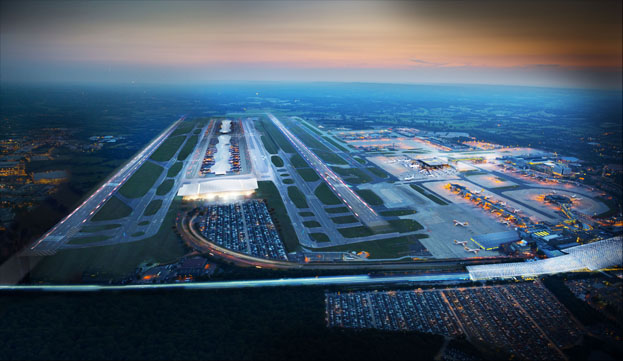 The plans for a new runway at Gatwick Airport

In other aviation news, Gatwick Airport has submitted its expansion plans to the Davies Commission, which is reviewing how to increase airport capacity in the South East. The commission, run by MT diarist Sir Howard Davies, has already heard from Heathrow and the Boris Island brigade: now it’s the turn of Gatwick.