There’s a reason 10s of thousands of us will descend on Cornwall this bank holiday weekend. The tip of the ‘English Riviera’ has a special place in the heart of many Brits with nostalgic memories of seaside holidays, cream teas and pretty fishing villages – not to mention the legendary surfing beaches.

It’s probably that same allure that’s attracted so many consumers to Seasalt, the fashion brand with its roots in 1980s Penzance that now has 48 stores all over the country and is growing fast.

‘I think what Cornwall's done really well over the past 20 or 30 years, since the Tate opened in St Ives, is showcase the creativity of people across lots of areas - food and drink, all manner of crafts, pottery, painting etc,’ says co-founder Neil Chadwick. ‘You've got the Tate, Rick Stein, the Eden Project. 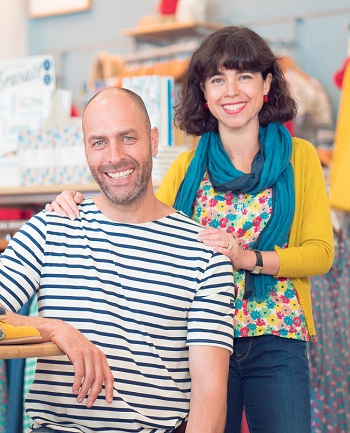 The company began its life as General Clothing Stores, a purveyor of practical workwear for fishermen, sailors and artists bought by Chadwick’s father Don after he stumbled upon it back in 1981. ‘We’d had a couple of shops in the Midlands but the recession in the mid-70s meant times were a bit tough and we were looking for a new opportunity. So we upped sticks and moved to Cornwall.

‘As a family we built the business up. Dad passed away in 2001 and my brothers and I had a decision to make about what to do with the business. We were quite ambitious and realised that you couldn’t really expand to the extent we wanted to as an independent retailer selling multiple brands.’

After meeting his now-wife Sophie (right), a textile designer, between them they devised Seasalt, a clothing and homewares brand inspired by Cornwall. Last year the company turned over around £41m and it's growing at roughly 20% per annum, with plans for another four or five stores by the end of 2017 (Its latest published accounts, for the year to January 2016, show a juicy pre-tax profit of £1.7m on £35m revenues).

MT grabbed a coffee with Chadwick to find out more:

How much has your role changed since starting the business?

I'm pleased to say I’ve done every role in the business, and I still really enjoy my first role, which was looking after customers and that's a big deal for me and my brother, that the people on the board understand that everything we do is for the customer. I still work in a shop weekly and drive around the UK in my campervan evangelising about looking after customers.

What are the biggest challenges you’ve faced so far?

Everything's a challenge, it's all been a challenge. We started off learning the business. Although we had an understanding of retail, we didn't have an understanding of what was required in sourcing and designing or running a larger business with lots of employees, logistics, the interesting dynamics of running a multichannel business when you're a wholesaler and a retailer, and selling online.

You’ve got 50 stores now, concentrated in the south-west but some as far north as Northumberland. How do you decide where to open new ones?

We use a combination of going there, seeing it, seeing how it feels, spending some time there, and then using market research, profiling the towns. We're trying to bring a bit of quantitative research to it along with the gut feel.

It's not always the obvious places. Me and my wife are our brand. If we go to a town and we like it - there's a high street which is interesting, often in a destination where we'd want to spend a day out. It's hard to put your finger on really.

How important a part of your business is exporting?

It's around 10% of our business. We've got a wholesale business in Germany with about 150 accounts, and online we sold to 56 countries last year. We're particularly strong in Commonwealth countries like New Zealand and Australia, America's good as well.

Cornwall's really recognised in Germany because of the author Rosamund Pilcher, who wrote lots of love stories, which are dramatised nearly every Sunday in Germany. You drive around in August and July and every other car is German.

You’ve never taken external funding. Why is that?

We've always considered options and never dismissed anything out of hand but we've always wanted to keep control and take things creatively in directions we want, and make big and bold decisions. And so we thought it would be better to row our own boat, even if the boat's a bit smaller. 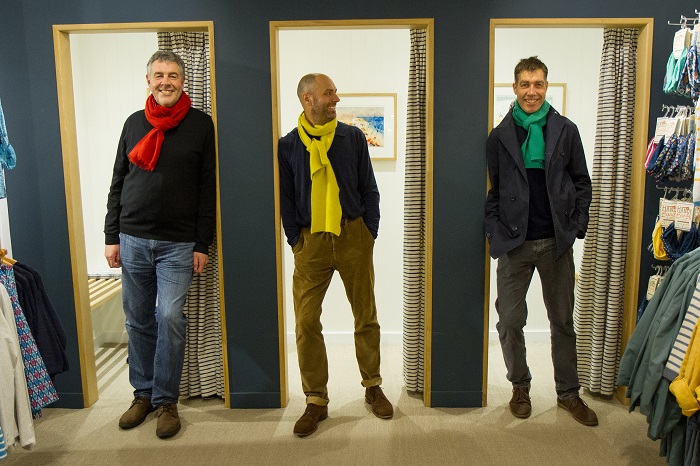 What do you know now that you wish you knew when starting out?

I've known this for a long time, but I didn't know it for the first two years of the brand - tell people your story. People find personal stories really interesting and at Seasalt we talk about what we do every day and the things that inspire us. Just be honest and tell people how it is.

You are co-chairman with your brother Leigh. Was it difficult handing over day-to-day responsibility to a hired CEO?

Well I've known our CEO for 22 years since he was a sales rep for Berghaus and we got on really well. We said that one day we'd like to work together. We'd always kept in touch and he'd gone on to quite senior positions in the industry. We had a bit of a chat and I said we'd like you to join us and fortunately he came aboard. It's been great, I think that's one of our success stories - finding the right CEO so we've got that mix of my entrepreneurial creative vision alongside the experienced business mind.

Who’s going to take over the business when you’re old and grey?

My brother's got kids and they might be interested, but there's no rush to see what happens now. I'm determined that the business isn't run by some old grey bloke, it needs to be a dynamic, energetic, vibrant person that relates to our customer base. Whatever my brother and I might want to do, we'll take a pragmatic approach and do what's best for the business. And for Cornwall.