If you've never seen a TED talk, where have you been? Created in 1984 as a one-off event, TED (technology, education and design) morphed into a four-day conference in California where attendees paid $475 to listen to the 'best minds speaking on their chosen subjects'.

The idea was franchised and soon similar events were taking place in 130 countries. TED really found its stride in 2006 when the best of TED talks were posted online. By 2012, TED talks were being viewed at the rate of 1.5 million a day.

I watched my first TED talk at the behest of my son, who urged me to look at Eric Whitacre, a composer and conductor with rock-star looks, who brought together hundreds of hairbrush divas from across the world to sing one of his compositions over the internet, thus creating a cyberchoir of a couple of thousand from scores of countries who had never met and probably never would.

It was a truly magical experience, as are so many other TED talks: crisp, precise and passionate and, above all, limited to just 18 minutes.

So where better to look for insight into what makes for great communication? Carmine Gallo had already employed this formula of analysing great exponents in The Presentation Secrets of Steve Jobs.

As an approach, it has merit, although it probably won't tell anyone with half an interest in communications skills anything new.

In 1988, five years after setting up my own communications coaching business, I attended a seminar on global communications for business leaders and met an Oxford don who, while not a natural public speaker himself (as he freely admitted), had used his academic skills to pick apart great speaking ability, codify it and then apply it to hitherto unsung guinea pigs with great effectiveness, turning tyro speakers into inspirational communicators.

We found an astonishing congruence between his approach and the methodology I had distilled from my experience of the broadcast media. Thus cross-validated, we went away happy in the knowledge that we both had something to offer.

So it is with Gallo's latest offering. He has rightly assessed from TED speakers the key elements that make for great presentations, although we could have done without the immodesty so often seen in the publications of our transatlantic friends.

'This book is among the most valuable books you'll ever read,' he avers in the first few pages. Why not let us judge for ourselves?

Gallo's other assertions are more usefully accurate: 'We're all in sales these days', a message my colleagues and I are still trying to get across to the professional and technocratic classes who tend to run big business.

One suspects they would rather not have to talk about filthy lucre at all. Gallo's certainly on the money with: 'Ideas are only as good as the actions that follow the communication of those ideas.'

All too often, speakers feel it's enough to get the message across; but if the audience does nothing as a result, you've been wasting your breath.

All the other usual presentational suspects are there. Delivery must be passionate and you have to be authentic. Above all, you have to tell stories. We're getting more and more requests to coach storytelling skills.

There's some interesting stuff about speed of delivery - slower is better - but Gallo points out that there are great variations. While the norm is 180 words per minute and 150 is better, achievement guru Tony Robbins speaks at 240 and Henry Kissinger at just 90.

There's a deliciously amusing literal on page 194, where in trying to promote the importance of the Rule of Three, Gallo mistranslates the motto of the French revolution as 'Liberty, quality, fraternity'. If only!

This book offers anyone trying to get better at spoken communications a comprehensive description of the elements that make for greatness. It is deeply researched and draws on some of the best examples of current public speaking. It is densely written and perhaps could have been more succinct. 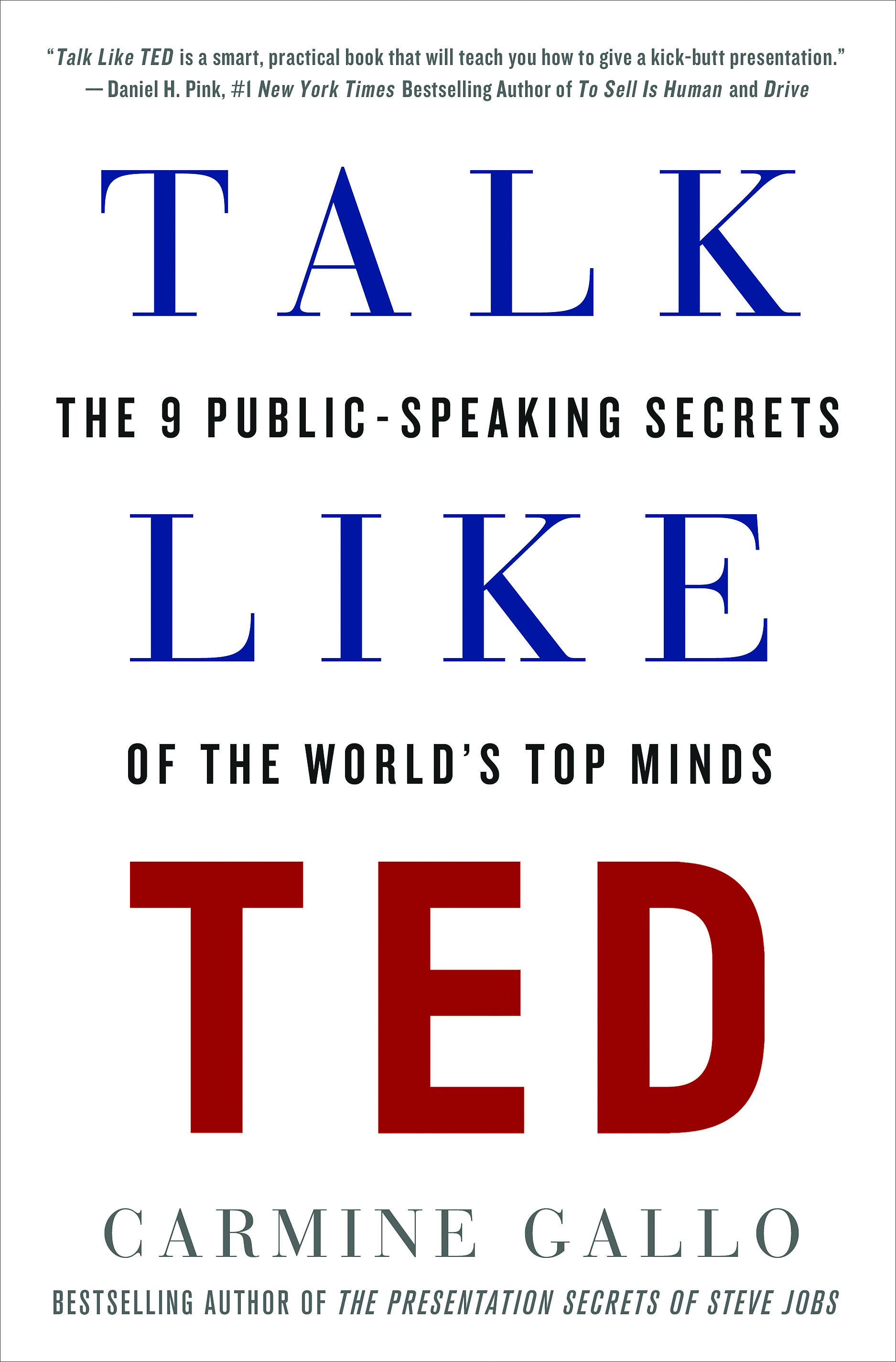 If all that was needed was a book, then this would serve you well. Sadly, it's not like that. There's a big difference between knowing what you need to do and actually doing it. Thank goodness, otherwise we coaches would be out of a job.

So, the book is a useful addition to the communications corpus and another validation of the fundamental truths of great speaking. And it provides a great list of TED talks to download and view.

Talk Like TED: The 9 public speaking secrets of the world's top minds