At the moment, services is by far the UK's most flourishing sector, so when Markit releases its monthly Purchasing Managers' Index for the industry, you know economists are going to sit up and listen. Particularly when the results smash analyst expectations.

Markit said its index hit 59.1 this month (anything under 50 suggests there's been a negative change to businesses), way higher than the 57.9 forecast. It's quite a change from last month: in June, the index fell to 57.7, from 58.6 the month before. 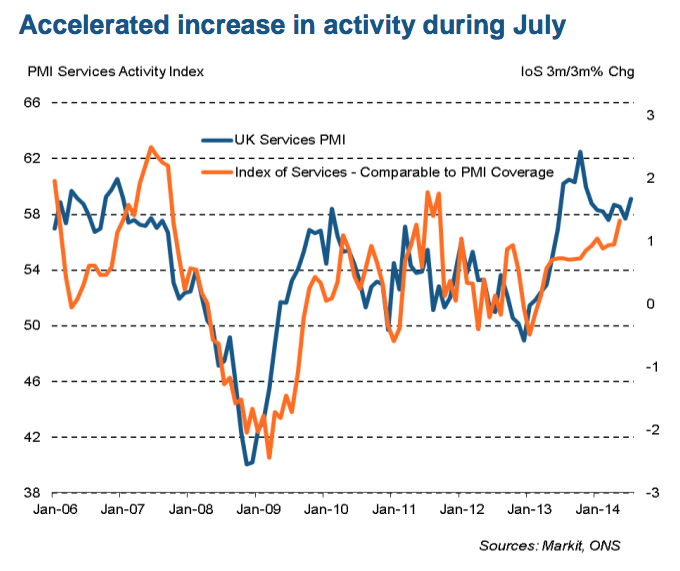 This is all very positive, particularly considering the fact Markit chief economist Chris Williamson reckons, if things keep going like this, we could be in line for yet another 0.8% rise in GDP during the third quarter - the third quarter in a row the UK has achieved that figure.

'The survey data point to the growing likelihood of yet another strong economic expansion in the third quarter. We would expect to see GDP rise by 0.8% again if the surveys hold their current levels,' he said.

If that happens, that means yet more pressure on the Bank of England to increase interest rates - particularly when you take into account figures also published this morning by the National Institute of Social and Economic Research, which said it expects unemployment to fall to 5.8% by the end of this year.

Considering Bank of England Mark Carney governor originally said he'd increase rates once unemployment dropped below 7%, that suggests the Bank needs to get moving. Alright, so Carney then said he wanted to wait for 'spare capactity' in the labour market to be absorbed - but as an excuse, that's weakening by the day.

At the moment, the consensus is that it'll still be the beginning of next year before anything changes. But there are also suggestions that some members of the Monetary Policy Committee, which sets interest rates, may change how they vote at the next meeting. So there's still everything to play for. Stay tuned...