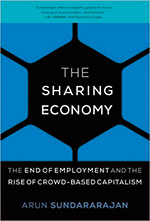 Like other writers, he grapples with the imprecision of the term 'sharing economy'. I opted for 'WEconomy' in The Business of Sharing and he drafts in a similar term in 'crowd-based capitalism'. Sometimes, he plucks a juicy anecdote of crowd-based capitalism (I wish there were more). My favourite is the tale of Californian Don Dennis who moved to a Scottish isle and funded a business producing flower essences from orchids through peer-to-peer lender Funding Circle.

When it comes to regulating the sharing economy, Sundararajan knows that current frameworks must evolve. His exposition on regulation is exemplary, walking the reader through its three variants. First, 'peer regulation', created largely by platforms' review systems. Second, 'self-regulatory organisations', comparable to the various Bar associations today, which aim to prevent bad actors discrediting their sector. Third, 'data-driven delegation' which will allow platforms to use data to prevent market failure, similar to how banks use machine learning to prevent fraud.

He also devotes two chapters to the future of work and the status of sharing economy workers. This is the battleground of Uber drivers and Postmates couriers, among others, fighting to be reclassified from contractors to employees to benefit from rights such as sick pay, maternity and insurance cover. He explains how the lack of clarification can prevent platforms from providing employee-like benefits for fear of class-action lawsuits that would decree all of their workers as employees. Instead, he advocates a 'safe harbour' for platforms as a stepping stone to new labour policy.

He challenges the simplistic binary that the sharing economy means either high-fiving micro-entrepreneurship or slave labour. He wonders whether higher-skilled workers might be more threatened by platforms like HourlyNerd than lower-skilled ones are by platforms that have to source labour locally. This future will matter. He quotes research that there are three million 'on-demand workers' in the US today, a number predicted to rise to seven million by 2020.

Sundararajan is a standard-bearer for the sharing economy, as he open-heartedly admits. He advocates requiring platforms to hand data to regulators only in a digestible form akin to public companies on an audit. But he is not overly soft, suggesting forcing platforms to punish their users' discriminatory behaviour, just as employers strive to weed out workplace racism. This perspective places him well to counsel the public sector.

The sharing economy canon is reaching maturity. If The Business of Sharing is the entrepreneur's view on this topic, The Sharing Economy is the academic's. Painstakingly researched, it should become the go-to text for readers looking for academic rigour when too often sharing economy writing has suffered from a lack of it. This foundational text should serve the subject's many future economists, sociologists and regulators well, for as Sundararajan puts it: 'Crowd-based capitalism is still in its infancy'.

The Sharing Economy: The End of Employment and the Rise of Crowd-Based Capitalism by Arun Sundararajan is published by MIT Press, £19.95

Alex Stephany is the author of The Business of Sharing and a board adviser at JustPark. Follow him on Twitter: @AlexStephany

By Éilis Cronin
15 hours ago
Women in Business

By Éilis Cronin
41 hours ago