The UK housing market has reverted to normal transactions levels from highs in 2013, Berkeley Group said this morning.

‘Since the start of the current financial year, the market has reverted to normal transaction levels from the high point in 2013, providing a stable operating environment,’ Tony Pidgley, the chairman of the London and south east-focused housebuilder, said in an interim management statement for the period 1 May to 31 August.

The group said it had built 15,750 new homes in London over the last five years, and cash due on forward sales rose to over £2.2bn in the last financial year alone.

However, across the market as a whole, there are signs the London property market is beginning to level out.

In the year to June, house prices in London increased by 19.3%, according to data from the Office for National Statistics. This pushed the average house price in the capital to £499,000, compared with the national average of £265,000. However, that 19.3% rise is a slight fall from the 20.1% recorded in the year to May. 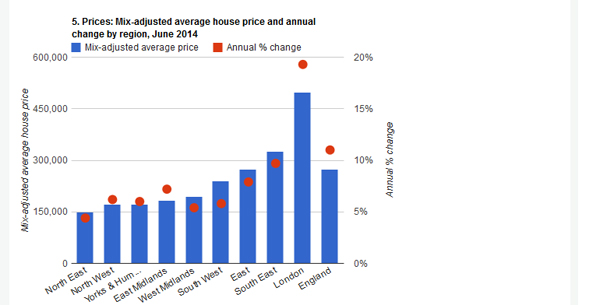 Property website Rightmove said last month that the average asking price for London homes which came on the market in August was 5.9% lower than in July as an influx of properties for sale forced sellers to price more competitively.

A stronger pound has also made London less attractive to foreign investors in recent months, on top of a number of tax changes including a rise in the levy for non doms and an increase in stamp duty.

Berkeley’s shares were flat at £23.93p in mid-morning trading.