It is safe to say Morrisons has been struggling of late. The supermarket has been losing market share faster than rivals Tesco, Sainsburys and Asda, as shoppers ditch all of the ‘Big Four’ for discounters Aldi and Lidl. Meanwhile, over the weekend, a doom-mongering ex-director described the retailer as ‘a supertanker heading for an iceberg’.

Chief exec Dalton Philips is under no illusion something drastic needs doing, having already announced a £1bn investment in price cuts six weeks ago after reporting an eye-watering £176m pre-tax loss for the year to February.

However, that failed to placate investors and the supermarket’s share price has continued its inexorable decline, falling almost a quarter so far this year. You can see how bad it looks when measured against Tesco (red) and Sainsburys (green), not that they, or indeed the FTSE 100 (brown), have been doing what anyone could call well.

Philips has therefore decided to come out swinging in the latest salvo of what is shaping up to be a bruising price war, announcing plans to cut the prices of 1,200 goods, around 40% of which are branded, by an average of 17%. No prices can be raised without his personal say-so either.

The supermarket also launched an ‘I’M cheaper’ advertising campaign, including handing out so-cheap-they’re-free fruit to sleepy commuters at train stations across the country this morning, and a price comparison website powered by mysupermarket.co.uk. 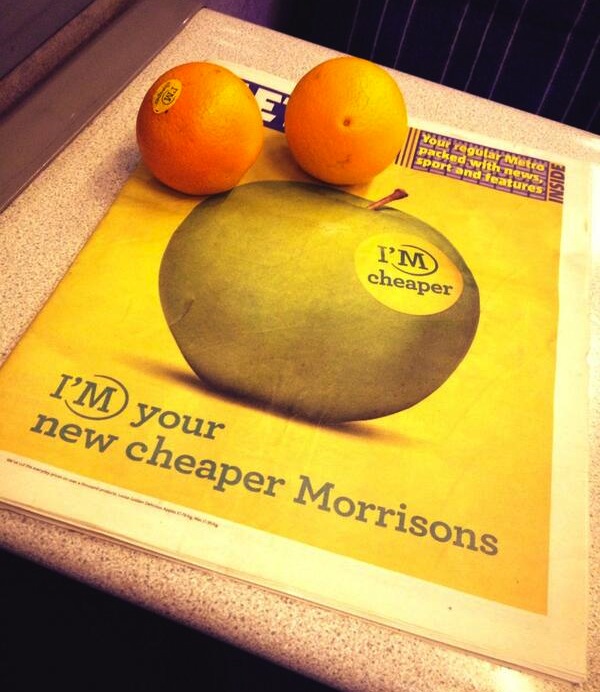 However, as the BBC noted, Morrisons is playing catch up rather than undercutting with many of its new cuts, rather like it did with convenience stores and online shopping. For example, a pack of Huggies Pure baby wipes was slashed by 60% to £1 – the same as Asda and Tesco (Sainsburys has a 2 for £2 deal).

Moreover, Tesco is investing £200m in price cuts, and has more firepower to play with than Morrisons. Sainsburys' Justin King is currently staying out of the fray (anyone who wants to hear his thoughts on the price war will get the chance to quiz him at MT Live in June).

Philips wants investors to know this won’t be a ‘temporary skirmish’ and warned ‘lower prices automatically and inevitably reduce the actual sales going through our tills’. Shareholders, however, need results, which the chief exec admitted aren’t going to show any time soon.

So, while a bold strategy may buy Philips time, it won’t save his supermarket’s share price just yet. People don’t buy out of blind faith – they need to see the money.