Sony, the once-mighty Japanese giant, has struggled in recent years to keep up with other major tech players, and its profits have continued to slow after being forced to drive down prices in a competitive market space.

In the latest major setback, Sony said a recent review of its mobile phone strategy has caused an impairment charge of 180bn yen. This means that it expects an annual loss this year of more than $2bn, nearly five times bigger than the Y50bn loss the firm had predicted in July for the year to March 2015. It expects an operating loss of Y40bn instead of a Y140bn yen profit flagged in July.

The troubled consumer electronics maker, known for the Walkman and PlayStation, said it would not pay a dividend to shareholders for the first time since the company listed in Tokyo in 1958.

It’s the sixth profit warning since chief executive Kazuo Hirai took the helm in 2012, promising to focus on Sony’s mobile, gaming and imaging units to help bring the firm back to profit.

Hirai blamed problems in Sony’s mobile division, which has been expanding but is now being pulled back, after Sony cut its full-year sales forecast for its smartphones to 43 million from 50 million. Sales of Sony's high-end Xperia mobile devices have suffered due to a lack of relationships with the major carriers in the crucial US market, leaving Apple and Samsung to take the lead.

It’s also struggled in China, where local makers are still dominant. Hirai said Sony will now cut 15% of the staff in its mobile unit over the next year to try to bring the unit back into the black.

However, it hasn’t been all bad news for the other parts of Sony, which has a market capitalisation of $21bn. The company has spun off its television unit into a subsidiary in the past year and sold its PC business. Its PlayStation game business remains strong, helping the unit return to profit in the second quarter.

But for the last decade, Sony has struggled to open a new era of growth and to return to its former glory.  Just as things seemed to be getting back on track, an earthquake followed by a tsunami hit eastern Japan in March 2011. The impact forced Sony to shut 10 plants temporarily, disrupting the flow of Blu-ray discs, batteries and other items. It also meant a big charge against earnings that year - and the $2bn in operating profit that Sony expected to announce in 2012 turned into a net loss of $3.1bn, the company's largest deficit in 16 years.

This was followed by a hacking attack, which forced the shutdown of the PlayStation Network. The strong yen battered profits, the sluggish global economy hurt sales, a CD and DVD warehouse burned in the London riots, and floods in Thailand shut component plants. 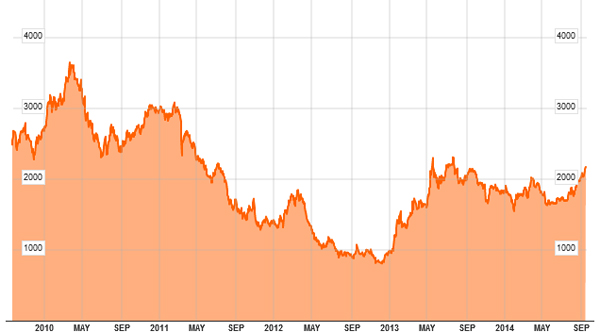 In the past few years, Sony has undertaken a major restructuring to try and stem the losses, but it still has a long way to go: In January this year, Moody’s cut Sony’s credit rating to junk due to its poor financial performance. But still, it has the support of a loyal domestic market and the Japanese government, for whom Sony - and the jobs it provides - remains a major concern.

Read: Sony - All Chewed Up?