A few weeks ago, as I was scanning the goods through the self-serve till at my local Tesco, I noticed an advert for their new Tesco Pay service.

In essence, it’s an app you can download, attach your credit card to, and use to pay with your phone. So just like Apple Pay then. Except with an extra app to download.

Not unsurprisingly, I thought to myself ‘why would they do this when Apple Pay exits?’. And as is so often the case when I have question that my wife doesn’t care about, I put it on Twitter. 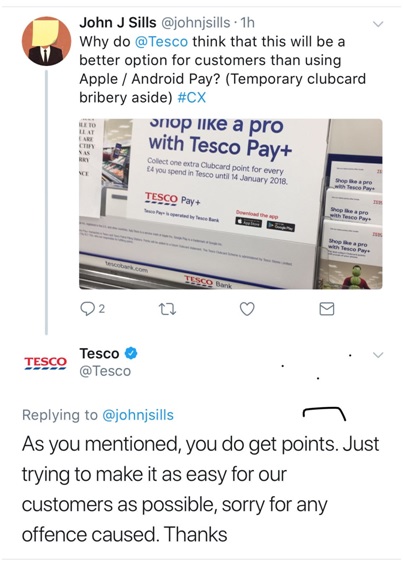 ‘Sorry for any offence caused.’

I’m all for trigger-finger social media managers getting involved ‘in the conversation’ and appreciated them giving an explanation. But being offended was really a very long way down on my list of thoughts and feelings I had whilst in Tesco that day, and there was nothing I could see that required any kind of apology.

Of course, as soon as this happened, and in line with well-known human biases, I started spotting examples everywhere.

The next day on a train to Norwich, a particularly apologetic train guard announced his regret that there’d be no announcement about our arrival at the next station, Manningtree, where we’d be arriving in a few minutes time. Perhaps thinking he hadn’t quite managed to calm our collective anger enough, he then apologised for us getting to Norwich one minute late, hoping it hadn’t caused us any inconvenience. He’d clearly never been to Norwich, or on a train in the UK.

Equally, I wasn’t remotely inconvenienced to find out that a female attendant might be cleaning the gents toilets in a service station a few days later, despite the sign-writer clearly thinking I might be. 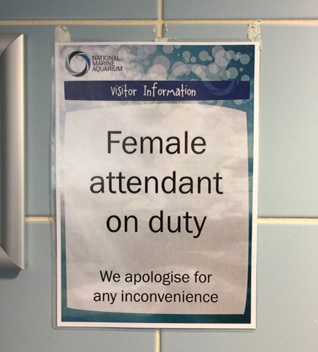 Companies are walking on eggshells, apologising for everything at every possible moment, scared of offending anyone who has a phone and a Twitter account. This epidemic of apology is captured beautifully by the website https://www.sorryfortheinconvenience.co.uk, tracking how often travel companies are saying sorry in real time. Within the first three months of 2018, the word has been typed over 120,000 times by companies desperate to avoid a complaint catastrophe.

Of course, apologising when something goes wrong is the right thing to do. But after a while, the word and the sentiment become meaningless, leading to a spiral of compensation rather than a relationship built on honesty and trust.  Worse than that, the relationship between company and customer edges further away from adult to adult, becoming more like a parent constantly scolding a child. And I don’t want a child looking after my money, energy, or weekly food shop, thank you.

For companies and customers to have a strong relationship, there needs to be mutual respect, honesty about what’s going right and wrong, and a willingness to explain to customers why you’ve made a certain decision. And sometimes, I’ll be a bad customer, and I’ll be in the wrong. And it should be ok for a company to tell me that too.

Ecotricity demonstrated this adult relationship brilliantly when explaining their recent price increase. There wasn’t a ‘sorry’ in sight (except for the one about Ofgem) –  just a clear and careful explanation for why this is the way it is: 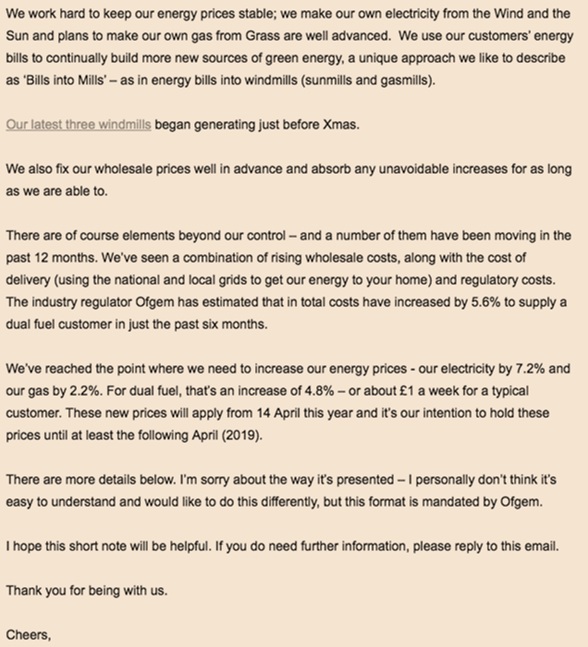 If there is a problem, acknowledge it, deal with it, and prove to me that it’s not going to happen again. But if not, stand up for what’s right and have a human conversation with your customer. The relationship will be better for it.

John Sills is a Director at The Foundation. If you enjoyed this article, you can find him on Twitter @johnJsills, or sign up to his blog at www.johnJsills.com for more of the same

By Kate Magee
17 hours ago
Food for thought