The inhabitants of London’s commuter towns are generally a mild mannered bunch, so if they’re getting shouty and boisterous you know they must be pretty peed off. That’s exactly what happened at the capital’s Victoria Station last night as protesters gathered to demonstrate against the service, which is a subsidiary of Go Ahead’s Govia Thameslink franchise and runs trains to Sussex and Hampshire.

At 5:30 PM as the city’s commuters prepared to board packed trains out to the suburbs, protesters unfurled a scarlet and black banner welcoming them to ‘commuter hell,’ drawing a crowd of dozens. ‘What do we want? More trains! When do we want them? On time!,’ they chanted. Speakers took it in turns to berate Southern, claiming its poor service was denying them a home life and making it harder to hold down a job in the city. ‘Sack the greedy controller,’ read one sign, ‘#SouthernFail,’ another.

The demonstration was brought on by Southern’s decision to introduce a new timetable with around 350 fewer services per day (leaving some stations without any trains at all), but is the culmination of years of commuter antipathy. As Peter Hendy, London’s former transport commissioner bluntly told MT last year, most of the city’s commuter trains are ‘shit’.

‘We want to be listened to, we want to get to work on time and we want to get home before our kids are asleep,’ one protester, Oliver Passey, told MT. ‘My journey should be around 15 minutes but it can take up to two hours, last week was appalling,’ added Croydon commuter Lee, who works in civil infrastructure. ‘People are annoyed, they just don’t have resolve anymore, it’s as if they’ve been subjected to waterboarding on a daily basis.’

No wonder Transport for London has resolved to take control of the capital’s commuter rail franchises within the next few years, a process current mayor Sadiq Khan is trying to accelerate. 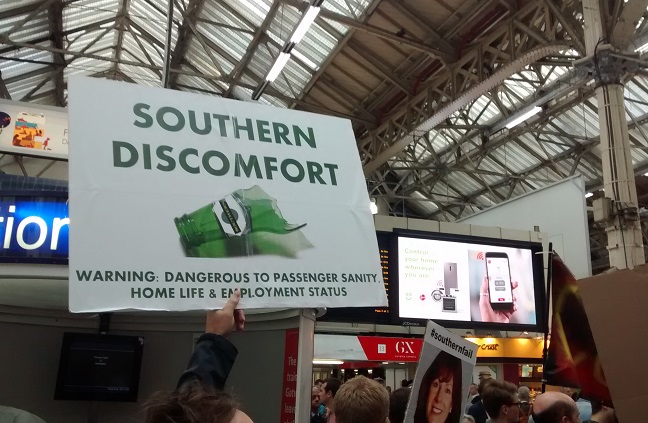 Of course it’s not a crisis entirely of Southern’s own making. Running suburban trains is not easy, least of all when you’re not even responsible for maintaining the track your trains run on and operating the signalling system that controls when they can move - both of which are in the hands of Network Rail.

But the management must take much of the blame. The franchise’s problems have been exacerbated in recent months because of ongoing ill-relations with its staff. Poor planning has led to chronic shortages of drivers and other staff, and when RMT members aren’t on strike, Southern says it suffers from ‘high levels of staff sickness’. That sounds a lot like code for ‘demotivation’ or even ‘laziness’.

It’s easy to blame bolshie union members for stirring up trouble but the failure to come to an agreement with workers lies firmly on the company’s shoulders. Speaking to angry commuters yesterday it seemed clear to MT that said excuse didn’t wash (even before the dispute began, Southern was already rated among the worst train operators for delays and passenger satisfaction). The logic of slashing the number of available trains to better cope with delays doesn’t carry much credence either. More ‘predictable’ services are of little use if there are so few of them that no-one can get on.

Talks with the RMT are expected to resume this week. If Southern can get workers back on board and return to a reasonable level of service then it might be able to quell the outpouring of anger that led to yesterday’s demonstration. But for many of those furious with week after week of daily delays, nothing short of nationalisation will do.

By Orianna Rosa Royle
24 hours ago
Food for thought

25 hours ago
Food for thought