You’d have thought a progressive reform of the much maligned stamp duty regime would be welcomed by the property sector. Indeed, shares in housebuilder Bovis have risen 4.7% to 896p since the reforms were announced in the Autumn Statement yesterday lunchtime, while its rival Persimmon’s have risen 4.5% to 1590p.

For estate agent Foxtons, however, the news wasn’t so welcome. Its shares dropped 7.6% to 145p in the hours after the statement, in a sign that investors fear what the new stamp duty system will do to its business. To rub salt into the wound, it was also dropped from the FTSE 250, to be replaced by Jimmy Choo.

Chancellor George Osborne has essentially removed the unpopular system of full bands or ‘slabs’ from the payment of stamp duty on property purchases. In its place, he’s introduced from midnight last night a graduated system more similar to the income tax regime (see charts below)

In a move that will surely be as popular with voters in May’s election as it is now with housebuilders, however, Osborne has also eased the burden on cheaper properties while increasing it for more expensive properties (it's all in the charts). It is this mansion-tax-in-all-but-name that threatens to hurt Foxtons.

Foxtons is unusually concentrated in the prime Central London market, where the majority of the most expensive properties are to be found. So, while other housebuilders and estate agents might see an uptick in completions, Foxtons’ high spending clients face heavier taxes, which will presumably chill the upper heights of the market.

It couldn’t come at a worse time for Foxtons. London’s property market has been sluggish at best since the summer and this has already savaged its numbers. In October, the firm issued a grim profit warning that caused shares to plummet 15%. Its full year results come out later this month, but the market already expects the bottom line to have been hit.

In October, boss Nic Budden downplayed the problems, defending Foxtons as ‘highly profitable, cash generative and debt free’. Well, he would, wouldn’t he, but perhaps investors share some of that faith. Following the initial post-statement dip, Foxton’s shares have now recovered all of their lost value, standing at 157.4p at lunchtime.

Just for you, here’s another chart to give you an idea of how it affects different properties. 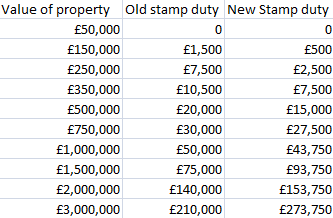 The new system should make life easier for both buyers and businesses, apart from those that deal with properties above about £1.1m. Unfortunately for Foxtons, an awful lot of those properties are in its central London heartland.