Getting your car repaired can be a frustrating experience. It’s not hard to find a mechanic but when you do it can be difficult to know if they are trustworthy. Do you really need £2,000 worth of parts and a day’s labour to stop your brakes from squeaking, or are they just taking you for a ride? Can you trust this stranger to look after your prized possession?

Andrew Jervis hopes to put your mind at ease. He’s followed his grandfather, father and brother into the auto-repair industry, but you’re unlikely to find him bent over an engine bay with his with greasy hands all over your gasket. Instead he’s founded Clickmechanic, a tech start-up that purports to take the hassle out of the process of getting your car fixed.

It’s a classic example of the thousands of marketplace-based start-ups that have emerged in the wake of Uber and Just Eat, making it easier to do everything from dry cleaning a suit to getting a haircut (indeed, former Just Eat CEO Klaus Nyengaard is one of Clickmechanic’s backers).

Clickmechanic users fill out an online form about the make of their car, their location and the problem, and then receive a fixed price quote upfront. (If you don’t know what the problem is, you can book a diagnosis first). A vetted mechanic will then come to the user’s house and do the work - or in some cases take the vehicle to a garage and then bring it back when it’s fixed.

‘As a kid growing up a lot of my summers were spent in parts departments and around workshops,’ says Jervis, who is originally from the Isle of Man. But his early career went in a very different direction. ‘I decided not to become a mechanic. I went to university, did a business degree and worked for a bank for a couple of years.’ He later started and sold a car parts ecommerce business, Quickhubs, before deciding he wanted to get into the potentially lucrative car repairs market, which is worth £21bn per year. ‘Research shows...about 50% of consumers felt they were getting ripped off when they took their car in for repair. That’s a lot of people spending a lot of money who aren’t having a good experience.’ 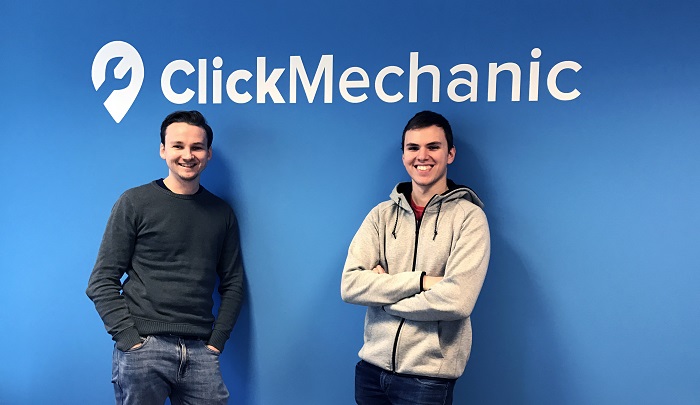 Rather than diving straight into the business or doing a conventional MBA, Jervis took the unusual step of doing a research-based masters in entrepreneurship and innovation at Manchester University. ‘A lot of people are quite cynical about education and say if you’re going to do a business, just do it. But I think the nature of the masters was helpful because it was so tailored towards, "right, you’re an individual person and you want to start a company".’ The teaching was limited to just four hours a week, so he spent the rest of his time writing a 70,000 word thesis on his target market, which included a business plan.

Then he joined the London-based tech accelerator Entrepreneur First, where he met his co-founder Felix Kenton. Five years later, Clickmechanic has signed up 1,000 mechanics covering most of the UK’s urban areas, and takes hundreds of bookings per day. Based in west London, its head office team of 20, split between tech, marketing and operations, is growing fast. And the company has talked investors into putting in around $1.7m (£1.36m) worth of funding, including a $1m round closed last week led by Forward Partners, backer of Zopa, Hailo and Hubbub. ‘The latest round was oversubscribed but when we actually closed it we were at a net profitable position so felt we didn’t need to take all the extra money, just enough to get us to our next stage.’

Jervis is flattered by comparisons with Uber – ‘a hugely successful company, it’s phenomenal; an amazing product, amazing execution, amazing growth.’ But Clickmechanic’s task is arguably a lot more complex than ferrying people from A to B. It provides dozens of different services, the costs of which can vary substantially depending on where you are in the country and the model of your car.

Hence it’s their quote providing tech which is at the heart of the business. ‘One of the very clever bits of our system is we licence millions of data points around repair times, parts prices, average regional labour rates’ says Jervis. ‘It’s very "dirty" data – there’s lot of holes in it, different naming conventions and coding systems.’ They clean it up and use ‘machine learning type stuff’ to fill the gaps. ‘It enables us to give these industry standard quotes for customers, which basically makes the whole process more efficient.’ Some competitors have even asked to licence the quote engine, he says.

One of the challenges the start-up needs to overcome is consumers’ lack of knowledge about their own cars. If you need a new headlight or you can see your fan belt has snapped then it’s obvious that’s what needs repairing. But if the engine is making a troubling noise or the steering isn’t as responsive as it should be then there’s any number of potential causes. That makes it harder to give a quote upfront, hence the need for customers to book a diagnostic inspection before finding out how much the final cost will be.

Isn’t there a danger mechanics show up and give a massively inflated quote for the work? ‘All the mechanics have to meet a certain criteria, and once they’re in the network the vetting doesn’t stop there,’ says Jervis. ‘Because it’s an integrated transaction we get lots of feedback and reviews on all the mechanics. If they did try to rip off a customer or don’t do the job properly we know, and we can ban them.’ More than 100 have been banned so far, he adds. In the future Clickmechanic plans to make its quotes for undiagnosed work more accurate by providing customers with plug-in on-board diagnostics devices that could automatically detect what’s wrong with a car.

Though his own company is backed by big bucks investors, Jervis says he has a lot of respect for those who go it alone. ‘We’ve raised venture capital which is really awesome and it’s really exciting to be part of that rocketship and have all that support. But sometimes you meet some companies where the founders have done it all the hard way and have been going at it for 10 years. You’ve really got to admire those people.’