Stagnating wage growth has been the hot topic of discussion among economy watchers lately, after data out last week showed pay excluding bonuses had crept up just 0.6% in the three months to June. It’s taken the pressure off Bank of England governor Mark Carney to raise interest rates but depressed workers rather, even as the economy is set to grow more than 3% this year.

The shock fall in annual Consumer Price Index inflation to 1.6% in July, from 1.9% the previous month and well below economists’ predictions of 1.8%, will cheer everyone with an eye on their squeezed pay packets, then (although it would be better for workers if wages actually grew more, rather than inflation falling further below the Bank’s 2% target).

Under-control inflation also makes it increasingly less likely the Bank will put up rates this year, or even the first quarter of next, even though Carney said on Sunday they might have to rise before real wages catch up with prices. Indeed if it stays stubbornly below 2%, we might even want to get worried about the spectre of deflation that is currently threatening to haunt the Eurozone. 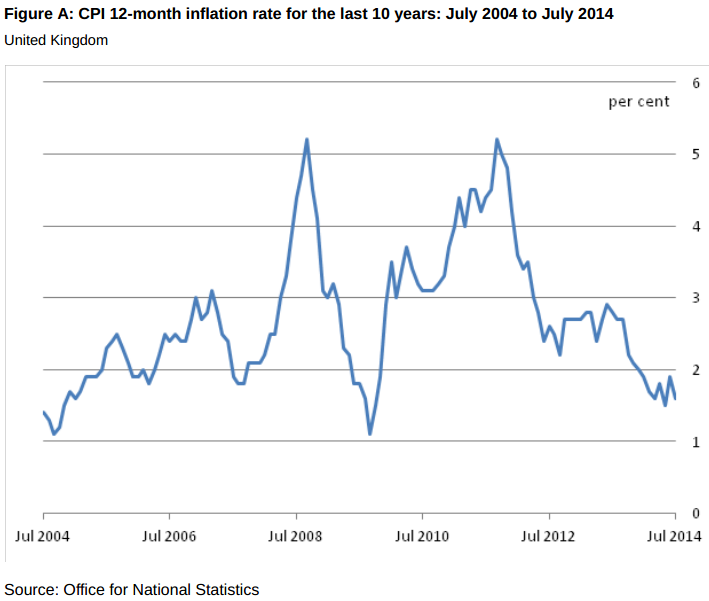 The surprise fall, led by a 0.2% fall in clothing prices and a supermarket price war-spurred 0.4% drop in food prices, prompted the pound to fall off a mini-cliff. It was down 0.5% to $1.6644 in mid-morning trading and had fallen to a four-month low of $1.6634, as the prospect of low returns from continued low interest rates prompted currency buyers to move their cash elsewhere.

That’s good news for exporters – another reason, what with the government currently unlikely to hit its target of £1tn yearly exports by 2020, for Carney to keep rates lower for longer.