A few weeks ago, I embarked on my bi-annual clothing shopping spree. This event is usually heralded by a hole appearing in one of my shirts, quickly followed by another, signalling the need to dive back into the world of e-commerce and bulk buy enough stuff to get me through to the next Olympic Games.

It was during this spree that I was reminded of one of the reasons why Amazon is winning. It could be Prime’s perfect 1-day delivery, Alexa’s amazing conversational ability, or Dash’s delightful single-button ordering system. But actually, there’s something more fundamental than any of that. Amazon designs customer experiences based on a belief that customers are honest.

When I do these clothing shopping sprees, I buy a lot, and send back nearly as much. This means many trips to the post office, and a lot of money floating in the air waiting to come back to my account. It can be a lot of effort and a lot of uncertainty, whilst I wait to see if they receive the parcel and give me my money back. A pretty important moment. And it was interesting to see how the different companies compared.

Zalando were first. After taking the parcel back to the local pick-up place, I received an email a few days later confirming that they’d received it, and that the money was heading back to me – at some point in the next ‘several days’. So far, so standard.

But unlike Zalando, they managed to annoy me by adding a note blaming the banks for this, as they can be ‘a little slow’. I took to Twitter to remind them that my office was just a few minutes’ walk from theirs, and if they really wanted me to have the money sooner, there were plenty of cash machines nearby. 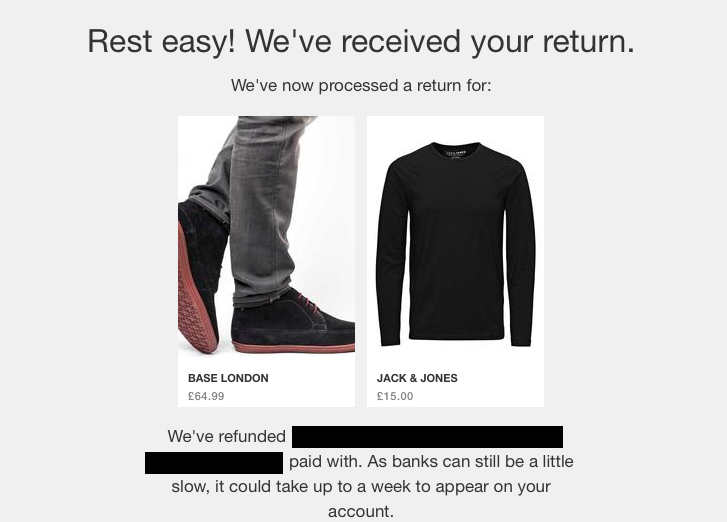 And then there was Amazon.

Having already sent back the other two parcels, I knew what to expect by now. A wait of a few days, a promise of payment a few days after that, and a sense of relief when the money finally appeared. I’d presumed this was the way it had to be done, given that’s the way everyone seemed to be doing it.

I dropped the parcel off at the newsagents at 9.54am, just in time for the 10am pick-up. By the time I’d driven home, a 10 minute journey, I had an email from Amazon. 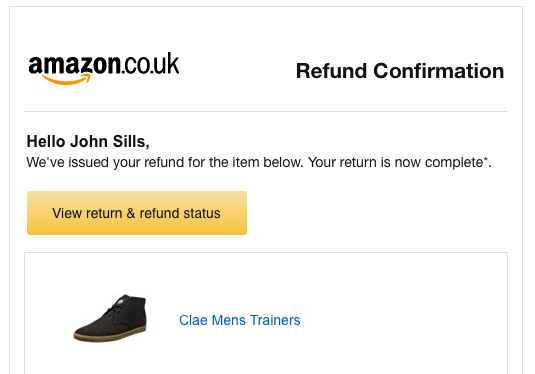 Amazon presumed the best, processing the refund the minute the package is picked-up, knowing it’s highly likely that I’m not going to rip them off and send them back a box with a brick in it.

The other companies presumed the worst, needing to wait until the package arrives to see evidence of my honesty, holding the balance of power (and money) and protecting their own interests first.

This is an issue in nearly every industry. Banks designing overly-secure apps and logon procedures. Train companies charging huge penalties for honest (and understandable) ticketing mix-ups, or my recent parking ticket for typing a zero instead of an ‘O’ on the machine.

Are Amazon the best clothes shop? No. Do they give me style advice? No. Do they seem to think I’d like a floral dress because I once bought my Mum a Maeve Binchy book? Yes. But they treat me as if I’m a good, honest person, not a crook trying get away with anything I can, which, combined with their low effort and low-cost shopping, is a fairly compelling experience.

And that’s why Amazon is winning.

John Sills is a director at The Foundation. If you enjoyed this article you can sign up to his personal blog for more of the same.