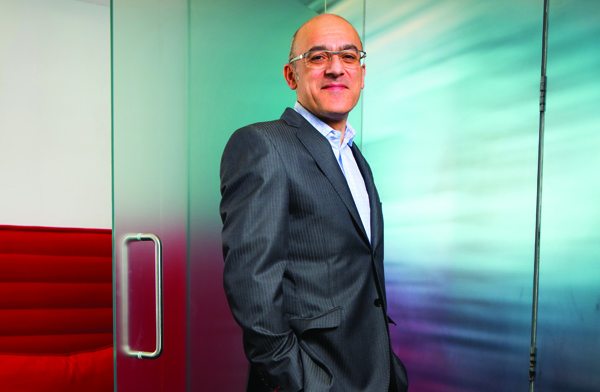 I get up at 7 and do half an hour of stretching (I injured my shoulder playing squash). I cycle from my house in Herne Hill to the office in Soho and then I could be in court or working on a case.

Suited and booted is the only way (we don't always have to wear ties nowadays, just in court). I've got easy access to Savile Row tailoring. I love that heritage when it's blended with a modern touch. Richard James and Mark Marengo do it fantastically well. Check out Bang Bang in Berwick Street for quality vintage.

Most lawyers have to wear glasses. The Eye Company in Wardour Street is second to none. If I want to go out for lunch, there's plenty of choice: Koya (Japanese), Quo Vadis, Barrafina (Spanish) are top of a starry list. And that's not to mention Hotel Chocolat for treats.

For convivial drinks, it's got to be The Groucho or The House of St Barnabas. I tend to be office-based, although people can work from home here. They don't need an excuse. If they've got a hangover, do I need to know? Not really.

I don't travel as much as I used to. When I do, the only essential item is my phone. It's a BlackBerry, although the company is soon moving over to the Samsung Galaxy.

My next holiday is skiing in Austria and then I'm off to Iran for a week with my mum in the spring (that should be interesting, I haven't been back for 10 years). I was born in Iran and my parents moved to the UK when I was three. My mum still has a house in a tiny village about two hours from Tehran, which she visits every year.

The best hotels are in Morocco, particularly the ones that used to be castles or residences. Kasbah du Toubkal, based high in the Atlas mountains, is my favourite.

Playing squash three days a week at Dulwich Squash Club helps me keep fit, as does cycling. Chelsea FC provides the sporting entertainment (and who isn't entertained by Mourinho?). Otherwise, it's London in all its glory at the weekends, from cinema at the Ritzy in Brixton to all our great theatres. I recommend seeing Twelve Angry Men at the Garrick.

I also enjoy museums. I thought the Shunga at The British Museum were fantastic. But at the end of the day, nothing beats a good book. At the moment, I'm reading Hilary Mantel's A Place of Greater Safety, which is even more impressive than Wolf Hall and Bring Up the Bodies.

I don't have luxury items. I would get an expensive bicycle, but it would probably get nicked as I often park mine against a lamppost. I use aftershave but don't moisturise.

My work brings me into contact with so many people who have achieved so much. The ones who stand out are those who don't lose sight of the bigger picture.

QCs such as Ed Fitzgerald, James Guthrie and Keir Starmer have done so much pro bono work with our charity, The Death Penalty Project. We're a long-term supporter of the charity, which provides free legal representation to people facing the death penalty in places such as the Caribbean and Africa.

Recently, I've been trying to steer my firm toward doing more to preserve, maintain and promote Soho. The Soho Society has already done so much. I'd like to set up an art festival or something to celebrate Soho's culture. If we are not careful, it will lose all its unique identity before we know it.