Wow, what’s not to like about that? For starters, the once-moribund British car industry seems to be well and truly back in the fast lane, turning over almost £70bn last year, 6.6% up on 2013, according to new data form the Society of Motor Manufacturers and Traders.

What’s more our carmakers - the likes of JLR, Honda, Vauxhall, Nissan and Mini - and the firms that supply them now provide no fewer than 799,000 well-paid, skilled jobs. (Of course the big names in the business are now almost without exception foreign-owned, but perhaps the more patient capital that comes from countries like India, Germany and Japan these days is one of the reasons for their success). 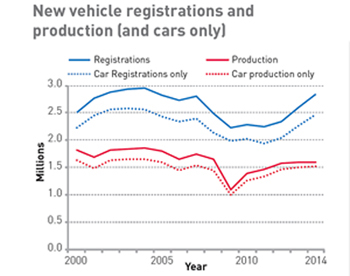 New vehicle registrations - which includes foreign built trucks, vans and cars too of course - are also up to 2.8m, a hefty 9.5% increase on 2013, while the overall number of vehicles produced in the UK rose a more modest 0.1% to 1.6m.

Meanwhile things are looking equally rosy at the other end of the value chain, at least if the data from market research outfit GfK is to be believed. Its consumer confidence index jumped 6 points in June, taking it all the way up to 7 (Not quite a Spinal Tap 11 but not bad).

That’s a level of bounce last breached in 2000, and not achieved consistently since the heady days of the late 90s and the peak of such dimly-remembered feelgood factors as Cool Britannia and the first Blair government.

Looking over a similar timeframe, the car industry’s turnover is up no less than 65% since 2000, and exports have almost doubled to £34.6bn. Even productivity - the new British disease according to many economists - is improving, with each worker now producing an average of 11.5 vehicles annually compared to 9.3 vehicles five years ago, and generating £440,000 turnover into the bargain.

So plenty of reasons to be cheerful on the face of it, but the big question is whether the feelgood effect will outlast the summer sunshine, and by how long. Confidence is a fragile thing, and with Greece teetering on the brink of leaving the Euro, the EU or both, there are plenty of bumps in the road ahead. Let’s hope UK plc doesn’t end up stalled at the side of the road again anytime soon.