Inflation is once again on a downward trajectory after an Easter-induced interlude, falling to 1.5% in May from 1.8% in April. That means pretty much the only pressure on Mark Carney to raise interest rates is coming from the currently booming housing market.

The annual rate was significantly below the 1.7% economists had been expecting and marks the sixth consecutive month that price rises have undershot the Bank of England’s 2% target rate. Inflation, as measured by the Office for National Statistics, hasn’t been this low since October 2009. 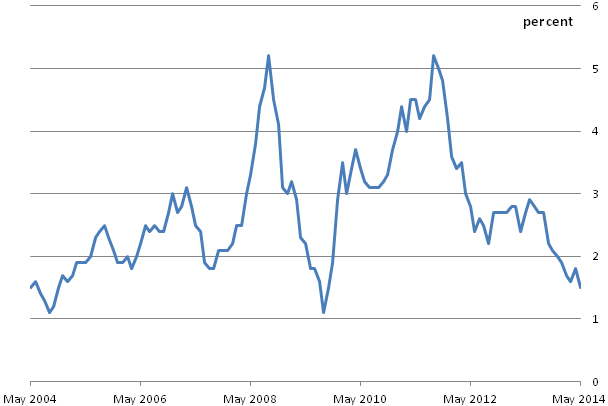 The fall comes after a month where price rises were skewed up by transport costs due to relatively early Easter holidays. Downward pressure also came from supermarket price wars pushing down food prices by 0.6% - the largest yearly fall in a decade.

While price rises may be slowing, wages have been even more sclerotic, creeping up just 0.7% in the first quarter of this year (which may explain the misery guts on display in today's Social Attitudes survey). That takes the heat off Carney even more, given that any interest rate rise could snuff out consumer spending.

However, housing remains the danger point in the economy and could mean the Canadian makes good on his hints last week to raise interest rates earlier than markets had been expecting.

House prices rose 9.9% year-on-year in April to an average of £260,000, fuelled by an 18.7% jump in London. Nationwide, amongst others, have suggested property may be coming off the boil. However, unless that rate comes down to more sustainable levels soon Carney may have to wave the magic wand of monetary policy, inflation or no inflation.