Shaun Pulfrey, the Dragons’ Den reject who turned his detangling brush into a £200m superbrand, is expanding his empire.

Today, Pulfrey unveils a brush, which has been designed for a brand new market: pets.

The Pet Teezer was inspired by Tangle Teezer customers, he explains. 'Many pet-owners were using their brush on their pets,' he claims. 'We thought it was a cute trend but then we did some R&D into a pet brush a few years ago.'

The project was abandoned amid fears it would dilute Tangle Teezer’s credibility with its human customers. 'We were a very young company then and didn’t want people to dismiss us as a pet product,' he says.

A year and a half ago, Pulfrey revisited the project. 'We’re strong enough to have a pet product in our portfolio now,' he claims.

'We didn’t want to just slap our name on a product so we worked in partnership with Battersea Dogs and Cats Home to develop the Pet Teezer,' he says. 'They helped us finalise the materials and design, testing our prototypes on their dogs and cats.' 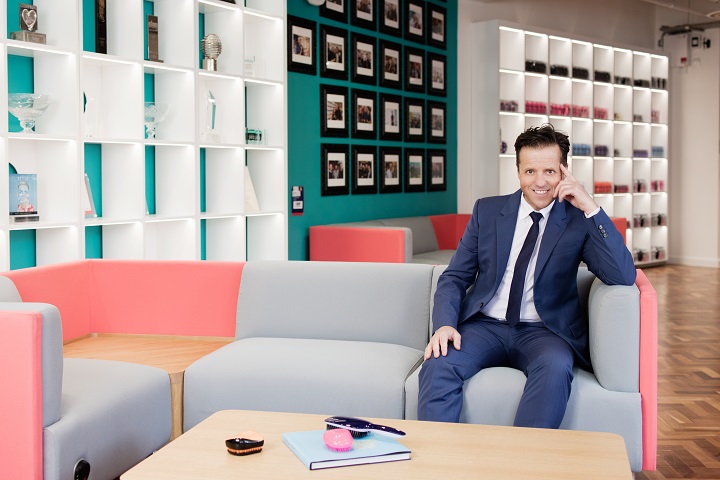 The UK is home to 8.5m dogs and 7.5m cats, according to the Pet Food Manufacturing Association, and pet owners spend an average of £95 a month on their furry friends. 'The market is massive,' says Pulfrey. 'And other grooming products are gruesome. That’s why pet owners were using the Tangle Teezer in the first place.'

Pulfrey has already secured deals with Pets At Home, the chain of pet stores, as well as a raft of independent stores and veterinarians. He estimates that he will sell 250,000 Pet Teezers in the first year.

Grimsby-born Pulfrey invented the original brush in 2007 but has branched out into complementary products in recent years. Bestsellers include the blow-drying and backcombing brushes. 'We spend between 2% and 5% of turnover on R&D right now,' he reveals. 'We’ve got a whole stable of products on the go.

'I’ve been working on a new brush for 3.5 years. I can’t say too much but this brush will turn every woman into a hairdresser.'

A revamped Tangle Teezer is also due out in the Spring.

'We’re doing a Dyson now,' Pulfrey claims. 'We want to introduce many more brushes. We want our fans to think, "Oh, Tangle Teezer is like that vacuum cleaner company that later brought out a fan. It makes other products too."

'As a company, we were built on innovation, true innovation,' he continues. 'When I set up the company, I spent £98,000 on developing the Tangle Teezer before I’d sold one brush.'

The Tangle Teezer, which promises to comb even the most unruly mop without damaging the hair, boasts celebrity fans including Victoria Beckham, Nicole Scherzinger and Cara Delevingne.

The Brixton-based firm turns over £31m and exports to six markets worldwide, including China, the US and the Nordics.

Tangle Teezer was laughed out of the Den when Pulfrey pitched his product on the hit BBC show back in 2007. Dragons’ Den investor Peter Jones called the invention 'hair-brained' while Duncan Bannantyne said it made him 'want to pull my hair out'.

'I never set out to prove the Dragons wrong because I already knew that I had a market,' Pulfrey says. 'When I was testing the Tangle Teezer out in my salon, women would steal it because it wasn’t on sale. The Dragons should have done a little more research, thought a bit more, and a bit harder.'