‘Would the really unhealthy workers please stand up?’ As rap great Eminem nearly said. We all know that a sedentary lifestyle is bad for us. Among other things it’s been linked to increased risks of cardiovascular disease, cancer, diabetes, depression and dementia. Yikes.

Unfortunately for most office workers, avoiding the deathtrap that is the humble chair is rather difficult. Let’s face it, unless you want to pack up your PC and become a postman, the only way you’ll be able to get active and get healthy is in your own time.

Let’s consider some of your options.

Where New Year’s resolutions go to die. The advantages are the range of machines and the motivation that comes with paying a monthly subscription.

Downsides include actually having to pay the monthly subscription (cancelling which can be about as straightforward as politely backing out of a time share contract) and the inconvenience of getting to the gym three times a week in the first place.

It also involves making your puny exertions in the middle of a room packed with sweaty people whose arms are bigger than their heads, grunting and hogging the squat rack so they can bench 120, whatever that means. Hardly ideal.

Who needs to pay for a gym, right? What's wrong with the pavement? Well, nothing... apart from the damage you could do yourself pounding your knees repeatedly on hard concrete and breathing in traffic fumes.

And the fact that there's only about 42 days a year when you'd actually prefer to brave the British weather rather than stay in to laugh at the people on The Apprentice over a T-bone or maybe some babyback ribs. This isn't looking good... 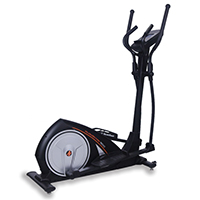 Now we're talking. A treadmill or elliptical trainer like this one from Nordictrack allows you to exercise at your own pace, in your own home, at times that are convenient for you.

The initial investment may be greater, but in the long term it's cheaper than the gym and easier on your body than running.

Besides, only having to travel to your spare room to blast your quads has its advantages, not least of which is that you might actually succeed in shaving off a few pounds and restoring some of your lost energy.

That last part is up to you though – you know what they say about leading a horse to water.