It took the great footballing nation of America to finally bring the long arm of the law to bear on FIFA, whose sponsors are no doubt thinking hard and fast about continuing to associate themselves with the most toxic of brands.

As well as 14 people, including seven top FIFA officials, being charged by the US authorities with fraud, racketeering and money laundering yesterday, the Swiss opened an investigation into the awarding of the 2018 and 2022 World Cups to Russia and Qatar (nothing like a bit of law enforcement coordination to stoke the drama).

Although it would be no surprise, of course, if Sepp Blatter were to hang grimly on as his minions tumble – 'Don Blatterone', as one Swiss paper called him, is in the same league as Robert Mugabe and Vladimir Putin in the barnacle stakes. (The Russian president even voiced his support for Blatter today, accusing the US of ‘another attempt… to spread its jurisdiction to other states.’ Takes one to know one.)

Meanwhile, statistics about migrant worker deaths in Qatar (not all of them linked to stadiums) are doing the viral rounds again. A Russian parliamentarian started the ball rolling on using prisoner labour to build its World Cup venues on Monday. And images like this are splashed all over the internet. 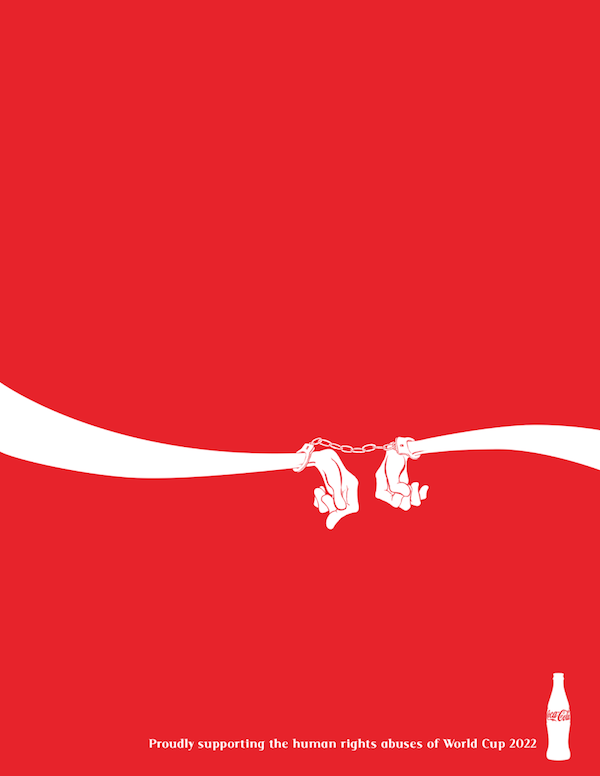 You’d hope the football governing body’s backers were all set to jump ship, but their statements were pretty anodyne for the most part – all are ‘concerned’, but no one is throwing in the towel on the world’s biggest sporting event. Yet.

Here are their comments so far.

‘This lengthy controversy has tarnished the mission and ideals of the FIFA World Cup… We expect FIFA to continue to address these issues thoroughly… and we are confident it will continue to cooperate fully with the authorities.’

Because FIFA has definitely been addressing the issues ‘thoroughly’ by suppressing its own report into the awarding of the 2018 and 2022 World Cups.

‘The Adidas Group is fully committed to creating a culture that promotes the highest standards of ethics and compliance, and we expect the same from our partners. Following today’s news, we can therefore only encourage FIFA to continue to establish and follow transparent compliance standards in everything they do.’

Encouragement is everything, guys.

‘McDonald’s takes matters of ethics and corruption very seriously and the news from the U.S. Department of Justice is extremely concerning. We are in contact with FIFA on this matter. We will continue to monitor the situation very closely.’

Is ‘extremely concerned about the legal proceedings being taken against certain FIFA executives and will continue to monitor the situation closely.’

‘We expect all of our partners to maintain strong ethical standards and operate with transparency.’

‘Our disappointment and concern with FIFA in light of today’s developments is profound. As a sponsor, we expect FIFA to take swift and immediate steps to address these issues within its organization. This starts with rebuilding a culture with strong ethical practices in order to restore the reputation of the games for fans everywhere… Should FIFA fail to do so, we have informed them that we will reassess our sponsorship.’

Finally, a proper threat. After all, it would be pretty awkward if a payments company was found to foot the bill, accidentally or not, for money laundering. Paddy Power’s got it almost odds on to be the first sponsor to give FIFA the boot.

With the #FIFA scandal rumbling on, which sponsor will drop them first? Betting here: http://t.co/1b3ak5My3X pic.twitter.com/ErVq9fLmxu

Sponsorship means a lot to FIFA: from 2011 to 2014 it generated 28.5% of the body’s $5.7bn (£3.7bn) revenues. But brands don’t have to fork out for official status to do well off football’s quadrienniel pageant – everyone from Nike to Apple-owned headphone-maker Beats got plenty of coverage via unofficial TV ads and social media.

Meanwhile, McDonald’s and Coca-Cola have plenty of image issues themselves, as purveyors of increasingly uncool, unhealthy fare. The last thing they need is to look out of touch with the 80% of football fans who would rather Blatter didn’t stand in the presidential election that is still, unbelievably, planned to go ahead tomorrow.

Actions speak louder than words. Emirates and Sony got off the gravy train last year, after the aforementioned report was quashed. Now is the time for the rest to drop the ball.

34 minutes ago
Food for thought