Today is Equal Pay Day – supposedly the day women start working for free until 2016. Time to crack out the green and purple lanyards and man the barricades.

Except, of course, women aren’t actually working for nothing. Today is just a symbolic day to mark the full-time gender pay gap, which stood at 14.2% in 2014, according analysis of the most recent official statistics by The Fawcett Society.

The gender pay gap is important, but it has far more to do with women taking time out of work to have children and working in less well-paid professions than it has to do with explicitly sexist employers.

An analysis of American data found a gender pay gap of 25.6% narrowed to just 2.7% when differences like experience, education and job title were controlled for. And women earn slightly than men in their 20s and 30s (i.e. before the impact of children kicks in). 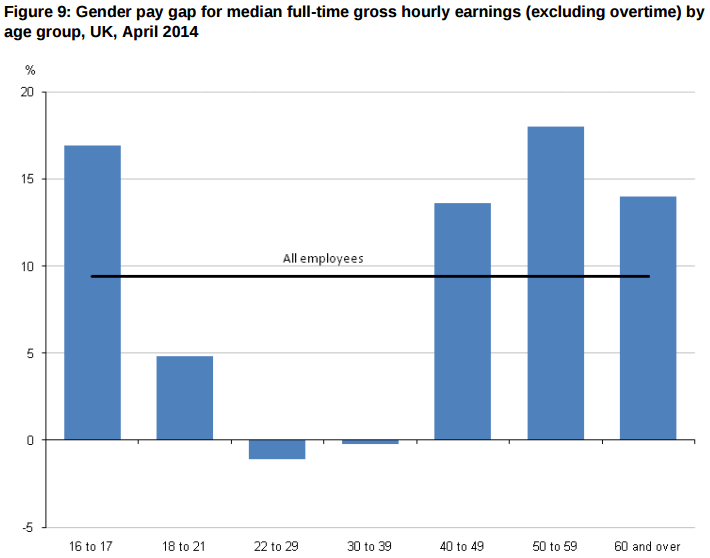 Bonuses may be another matter. There isn’t official government data, but pay data company Emolument found women within five years of finishing an MBA get an average bonus of £27,000, a little over half the £50,000 male MBAs get.

Given that women are notoriously bad at asking for pay rises, it wouldn’t be surprising to see that pattern repeated across job levels and professions. But we’ll have to wait for the government’s new requirement for companies to report their gender pay gaps – including bonuses – to come into effect to get more data on it.

Moreover, we need to ask why women are crowded in less well-paid work. Women make up more than 60% of those earning less than the living wage (the proper one, not the new government one) and are 80% of care and leisure workers. And almost half of women work in ‘low skilled jobs’ (as defined by the Office for National Statistics) compared to 18% of men.

Much of that will be because it is low paid part-time work that can be fitted around childcare (although both men and women can be part-time high fliers – see MT’s Power Part Time list for plenty of evidence of that). But some argue that the reason ‘caring’ work, for example, is low-paid is because it is seen as ‘women’s work’ and so not as valued.

But that debate is far more complicated than declaring women are working for free until the new year. Time to stop spreading simplistic slogans and start tackling the thorny issues.

Want to debate the gender pay gap with like-minded women? Come to MT's Inspiring Women conference in London on November 19 - book before November 11 and get 20% off with the code IW20.