Many of the world’s wealthiest and most influential people will be gathered in the Swiss ski resort of Davos for the World Economic Forum this week (the ones that haven’t bored of an increasingly staid affair anyway), so Oxfam decided it was just the right time to highlight just how ridiculously privileged they are.

The world’s richest 1% are on course to be wealthier than the remaining 99% of the 7.29 billion people on this planet next year, the charity said. Meanwhile, more than 1 billion people live on less than $1.25 (82p) a day.

There’s no guarantee they’ll overtake the rest of us – after all, the 1% had 48.7% of global wealth at the height of the dot-com bubble at the turn of the millennium.

The wealth of the top 1% - versus everyone else. Source: Oxfam, Credit Suisse

Nonetheless, the figures are still staggering, which makes it all the harder to argue that absolute poverty, rather than inequality itself, is the only problem. For example, the top 80 billionaires are worth more than $1.9tn, more than the poorest half of the world’s population and a $600bn increase in the last four years, according to the Oxfam analysis of Forbes data. 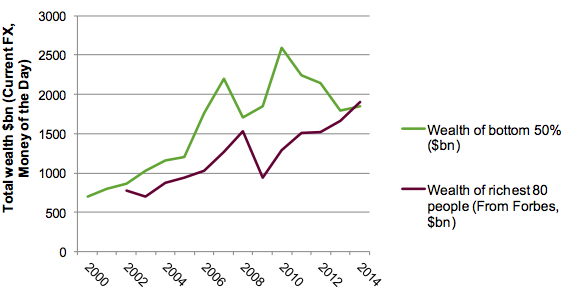 The riches of the top 80 billionaires - versus the poorest 50%. Source: Oxfam, Forbes

There is a good motivational argument for allowing entrepreneurs to hang onto much of their self-made wealth. Moreover, as the right-wing Adam Smith Institute pointed out, ‘rising global wealth inequality… has come with unprecedented declines in global poverty.’

But would more redistributive policies, and less ridiculous employee-executive pay multiples in the west, really have killed the incredible phenomenon of hundreds of millions of people, particularly in China, joining the middle class?

Quite possibly not – if various research from the International Monetary Fund and the Organisation for Economic Cooperation and Development is anything to go by. The latter pointed out that poorer people tend to spend proportionally more than those who have it all (who needs another yacht anyway) hence why more equal economies tend to be faster growing.

President Obama’s proposal to raise taxes on the banks and the wealthiest 1% in the US to fund middle class tax credits predictably met with huffing and puffing from his Republican adversaries in Congress today. Redistributive taxation, though, can be a blunt tool with plenty of negative unintended consequences.

On the other hand, closing the inequality gap through better education and encouraging the creation of more higher-paid jobs isn’t easy either – and takes time. Meanwhile, equality of opportunity, which only really holds in the west anyway, is ringing pretty hollow, as the Piketty-esque populists baying at the gates of billionaires and businesses are becoming increasingly restive. This debate is far from over.