The discount retail entrepreneurs are worth £1.9bn. 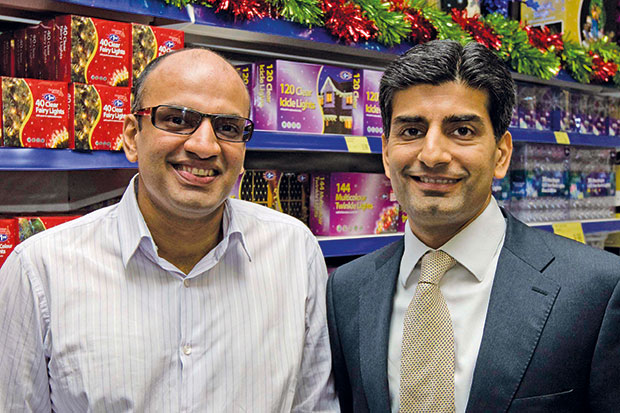 Simon Arora (above right) reckons that the discount retailer B&M he is building with brother Bobby (above left) is ‘to general merchandise what Primark is to clothing’. The 45-year-old studied law at Cambridge and worked as an analyst for McKinsey, 3i and Barclays. By contrast Bobby, now 43, went into business at 18, importing homewares. ‘They’re like chalk and cheese,’ an executive who worked with them recalled. ‘Simon is very polished, very slick, very strategic and is a great front man and a really good board member. Bobby is like a market trader. They are so totally different, you wouldn’t believe they were from the same family.’

It was back in 1995 that these unlikely siblings started out, supplying retail chains with cheap homewares sourced from Asia. In 2004, they bought B&M, an ailing grocery chain in Blackpool. The brothers introduced homewares, toys, toiletries, pet goods and clothing. More than 90% of what they sell is non-food. It offers knockdown prices by buying from suppliers in the Far East and manufacturers’ clearance sales. Now headquartered in Liverpool, B&M has over 450 stores and by spreading south across the country aims to have 850 in six years.News of their far from bargain-basement performance spread, and in 2012 the Aroras sold a 60% stake to American private equity group Clayton, Dubilier & Rice valuing it at £965m. Its new owner also brought in ex-Tesco titan Sir Terry Leahy to chair the firm. Exit was via a stock market flotation last year, which valued B&M at £2.7bn.

But some City watchers fear that B&M will go the way of its chairman’s alma mater, Tesco, as competition in the discount sector hots up. Simon rejects the comparison – he told the FT that the pace is ‘steady Eddie rather than a mad rush for growth’.