Goodbye Twitter. It's been an amazing ride, and I will cherish the memories.

Rowghani had been increasingly unpopular at the social media network recently, according to tech website Re/code. He sold 300,000 shares for $9.9m (£5.9m) when the lock-up period after its November float ended. Other executives, who hung onto their shares, were reportedly not impressed, although Rowghani apparently told them it was to donate to research into the disease that killed his father.

A glowing Wall Street Journal profile which dubbed him the ‘co-CEO’ didn’t go down well either, according to Re/code. Meanwhile, Rowghani had also come into conflict with the rest of the board when he tried to push for the acquisition of music-sharing site Soundcloud and also courted streaming service Spotify, according to the FT.

Twitter confirmed Rowghani's resignation in a regulatory filing. 'Mr. Rowghani will continue to be a Twitter employee and act as a strategic advisor to the CEO,' it said.

'Twitter does not intend to hire a replacement for the COO role, and all of Mr. Rowghani’s operating responsibilities will be assumed by other members of the Twitter management team.'

Meanwhile, Chief exec Dick Costolo ditched the corporate stiff upper lip (perhaps to scotch those rumours of a rift), in a rather saccharine tweet (natch).

@ROWGHANI Thank you for being an incredible executive & partner. Twitter could not have succeeded without you.

Twitter has had a history of change at the top. Original chief exec Jack Dorsey made way for co-founder Evan Williams, who was then replaced by Costolo in 2010. Chief engineer Christopher Fry, who had been the second highest-paid executive, also stood down in May and became an adviser.

The nail in Rowghani's coffin, however, was probably Twitter’s lacklustre user growth. It announced it had 200 million users in 2012 and said it expected to get to 400 million by the end of 2013. However, it only managed 240 million users and that crept up to just 255 million in the first quarter of 2014.

Investors were not impressed. Twitter’s shares had fallen almost 21% since it floated and 47% so far this year. 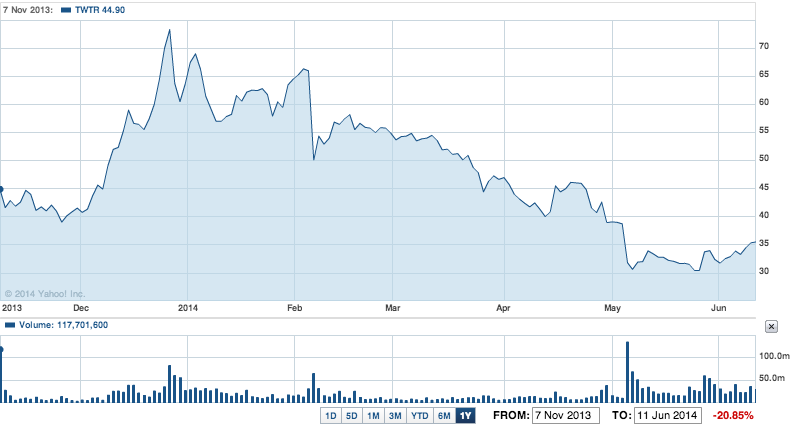 So far, though, they seem to be giving the news a thumbs up, with shares up almost 4% in early trading in the US.

14 minutes ago
Food for thought

19 hours ago
Food for thought