The UK economy shrank less than previously thought during the 2008-9 downturn and we’re all slightly richer - thanks to some clever accounting from the Office for National Statistics, which now counts drugs and prostitution as part of GDP.

The economy contracted 6% from peak to trough in the recession, according to the new data, which also factors in new European accounting standards. That’s a darn sight sunnier than the previous figure of 7.2% and means it passed its pre-recession peak in the third quarter of 2013, rather than the second quarter of this year. 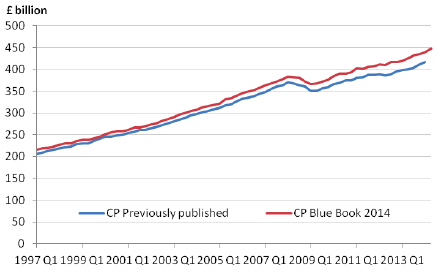 Growth in the second quarter of this year has been revised up from 0.8% to 0.9%, but that was cancelled out by a downwards revision in the first quarter, from 0.8% to 0.7%.

GDP was revised up by an average of around £53bn, or 4.1%, each year from 1997 to 2013, and the economy was £100.5bn bigger than previously thought last year. Real GDP per capita also shrank less than we thought before, although it was still 1.8% below pre-crisis level in the second quarter of this year.