Last year may be one Volkswagen wants to forget, but the rest of the motor industry has shifted up a gear. 2015 was a record year for new car registrations in the UK.

There were fears that trust in the whole industry would be damaged after the VW emissions scandal. But it certainly hasn't hampered sales in the UK, according to figures from industry body, the Society of Motor Manufacturers and Traders (SMMT), which said 2.63m new vehicles were registered in 2015. That’s up about 6% on 2014 and marks the fourth consecutive year of growth.

The market has posted increases in all bar one of the past 46 months, topped off with the biggest December on record – up 8.4% – with 180,077 new vehicles registered. 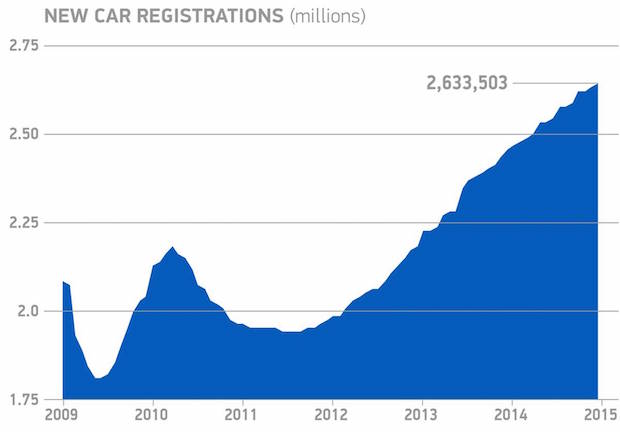 Demand from UK fleets was up 11.8% to record an all-time high of 1.3m units, while private sector demand also grew 2.5%. There were gains across all fuel types as petrol and diesel registrations went up 8.4% and 3% with equal market shares.

‘The new car market defied expectations in 2015, hitting an all-time record driven by strong consumer and business confidence,’ said Mike Hawes, the chief executive of the SMMT. Buyers 'took advantage of attractive finance deals and low inflation to secure some of the most innovative, high tech and fuel efficient vehicles ever produced,' he added.

Ford’s Fiesta was the overall best-seller with 133,434 new registrations in the year-to-date and two VW models made the top ten. 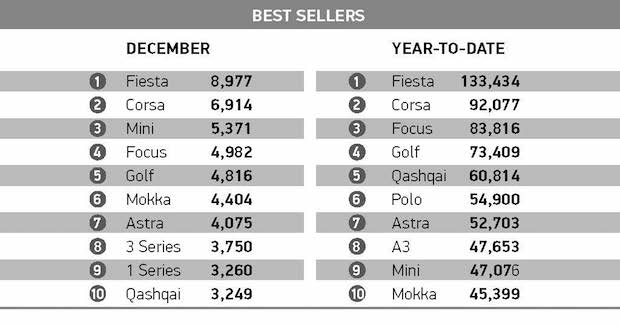 The growing trend for ‘alternatively fuelled vehicles’ (AFV) also continued –rising 40.3% to secure its biggest market share to date of 2.8%. It's still relative small fry, but it's making gradual inroads in a well-established market. Plug-in hybrids in particular proved popular as volumes more than doubled, while registrations of pure electric vehicles were up 50%.

There’s a long way to go before Brits are as passionate about electric cars is quite as high as in Norway though. Industry data said nearly 26,000 zero emission cars were registered in 2015, accounting for 17.1% of new car registrations in the country (up from 12.5% in 2014), putting it in pole position worldwide.

Norway offers buyers a range of incentives – regular cars are heavily taxed, but green car owners benefit from tax exemptions, making them much more competitively priced. In certain circumstances, they’re also gifted the use of bus lanes and free parking. That in itself doesn’t come without its problems – measures such as these have been controversial due to the high cost.

George Osborne announced a revamp to tax on new vehicles in his July Budget last year, removing exemptions for greener cars and hiking up charges for more expensive SUVs and saloons. He said the system of discounting or waiving vehicle excise duty for greener vehicles wasn't sustainable, since three-quarters of new cars would be certified as low-emissions vehicles by 2017 (so not liable for VED). But there was a long-term extension to the government's Plug-in Car Grant announced in December, guaranteeing it until March 2018.

Permitting green cars to use bus lanes might be a doable extra concession in the UK, though whether it'd be enough of an incentive to considerably boost electric car take-up is debatable.

By Stephen Jones
11 hours ago
Coronavirus

By Matthew Gwyther
37 hours ago
Women in Business