With last week’s election already fading into distant, uncomfortable-for-some memory, attention has turned to the new Conservative government’s policies. One that has been a particular bugbear for business in the previous five years is the Tories’ failed pledge to bring down migration to the ‘tens of thousands’. But it could be about to get a whole lot more frustrating, as the limit on skilled non-EU migrants is about to be hit.

The yearly cap of 20,700 Tier 2 visas, introduced in April 2011, was almost filled between April 2014 and March, according to data pulled from Freedom of Information requests made by the Oxford Migration Observatory. For the first two years of the system, companies applied to sponsor less than half of the available visas. 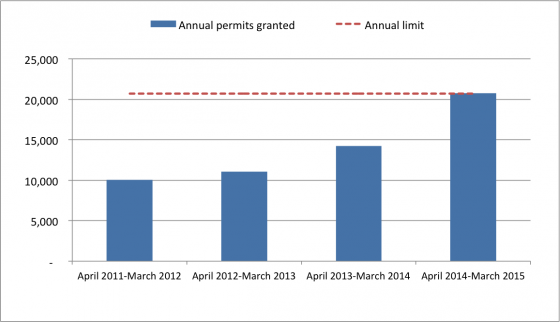 But as the economy has kicked into gear, applications have unsurprisingly increased. And if the trend continues, the cap – which the Tories committed in their manifesto to keeping - will be breached, ‘perhaps substantially,’ the Observatory said. In April, the monthly limit was already increased by 825, meaning there are 75 fewer visas a month available for the year of the financial year. 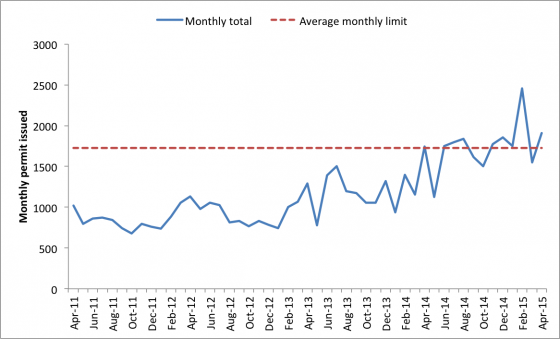 ‘That will mean the government will start refusing visas to certain employers,’ Observatory director Madeleine Sumption told the FT. Low salary jobs will be the first to be hit under the points system, the Oxford University group said. That could hit young people applying for entry-level positions and nurses. Tier 2 nursing applicants have a median salary of £25,000, compared to £35,000 for software developers and £51,000 for ‘medical practioners’.

For companies struggling to fill positions with skilled British or EU staff that could cause plenty of headaches in the coming years. The Government, meanwhile, looks stubbornly determined to press on with the misguided policy.