Being 21 isn't what it used to be. Fresh out of university with a good degree under your belt, you'd expect the world to be your oyster and to land an interesting job, move into your own place and enjoy your freedom. But today's reality often means returning to the family home, spending a lot of time tapping your parents' contacts and applying for unpaid internships, with only a slim chance of finding a full-time job in your chosen career. If you don't come from a privileged background, things are even tougher.

Excluding those who have gone travelling or are in postgraduate study, the unemployment rate for those who graduated in 2010 or after stands at just under one in five. In 2011, 36% of graduates took lower-skilled jobs, compared with 27% in 2001, and each graduate position is chased by 43 applicants. Unsurprisingly, the biggest slump in graduate vacancies has been in investment banking and fund management. Prospects remain volatile, says Carl Gilleard, CEO of the Association of Graduate Recruiters (AGR). 'Graduate recruitment is largely based on confidence, so if businesses feel the market is improving, they'll take the brakes off. But if they see gloomy forecasts, the brakes go back on.'

With general unemployment running at 8.4%, graduates are fighting for jobs against the more experienced and - in employers' eyes - more deserving. Next month, when university courses finish, thousands more graduates will flood the market.

Employers are reaping the benefits of this oversaturated market, some taking advantage of the keen talent knocking on their doors, desperate for a chance. It's not rare for graduates to work months for no money (not even expenses), or even to pay for the privilege. Jane Standley, director of the University of Reading's careers centre and a board member of the Association of Graduate Careers Advisory Services (AGCAS), recently advised a student not to pay £2,500 for work experience with a City bank. 'Getting into a career shouldn't be about your ability to pay for it,' she says. Others might say: if that's what it takes ...

Jason Brown, 23, who graduated last year from Kingston University's graphic design course, wants more of a meritocracy. He moved back to the family home in Devon once the money ran out and, since July, has been applying for jobs and staying over with friends in London - though 'it costs so much for travel and I don't come from a well-off background'. He's had 16 interviews, all for unpaid work experience, the most recent of which was with a design agency - which told him that 250 people had applied and it wouldn't be able to give him a job.

Brown also worked on a branding project for BBC3, who didn't even have the courtesy to get back to him. He is worked up about the situation, saying graduates don't have any rights. Even worse, most jobs aren't advertised, so it's all about who you know. 'It's 2012, not the 1970s,' he says in exasperation.

Menelik Simpson, 23, is from Wolverhampton and graduated alongside Brown but has had more luck, not least because he has had a place to stay for free in London with his aunt. On graduation, he landed a placement at a publishing company near the City but couldn't stay for long as he couldn't afford the travel.

He applied for jobs in design and photography but, pragmatically, also pursued work in retail. He got a job at Reiss as a shop assistant and took time off whenever he could to work on creative projects. Crunch time came when the manager left and Simpson realised that he could easily get sucked into retail full-time. He quit, deciding to put all his energy into pursuing a career in design and photography. 'I feel quite positive, because I've been busy doing things. But when I finished I was quite worried, because it took a long time to get a job,' he says.

The term 'internship' seems to be used to describe any kind of work experience. Properly, an internship is a paid, structured work programme with a blue-chip company, done before your final year, with a possible route to the graduate recruitment scheme. Gilleard says AGR's corporate members typically pay £300 a week and use internships as a form of selection process. But much more common is an unpaid stint for a business done after graduation, in which you're asked to do real work but for no recognition and with no prospect of a job at the end of it. If you're a graduate, you'll let yourself be used thus because, without experience to add to your CV, you're even less employable. It's Catch-22.

Coco Bayley, 25, knows all about internships. She graduated from Oxford four years ago with a degree in archaeology and anthropology but is struggling to find a career. After a year in Paris and a masters, she started a three-month unpaid internship in November 2010 with an events company, before switching to full-time work in a restaurant for a few months. She then started another internship at a web company. 'That was unpaid,' she says. 'They didn't even cover travel expenses. I really enjoyed it, but I got tired of working for free.'

Bayley applied for 30 to 40 entry-level publishing jobs last year, but didn't hear back from any of the companies. She now works as an HR assistant, but admits this job is likely to be short term.

Last Christmas, she set up a short-lived pop-up bar in Peckham with friends, and wants to do it again in the summer. 'I lost a lot of confidence last year. Running the bar was more fulfilling than internships.'

Meanwhile, 22-year-old graduate Harry Mill's studies in security and terrorism couldn't be more pertinent, yet since completing his MA in the subject at Leeds University last year, he's still trying to find employment in defence, risk analysis or intelligence. He lives in Surrey with his parents, working part-time at the local golf club. 'I'm pretty lucky, because I've got a roof over my head,' he says.

Out of university for six months, he's conscious how easy it is to slip into routines that are hard to get out of and he makes sure he goes to the library and back up to Leeds to keep busy. He says his friends are playing the numbers game by sending out a 100 CVs on spec, but he's going for quality over quantity, having applied for 15 graduate-level jobs - although he hasn't heard back from any of the firms.

'When I started university, things were all rosy. But in the second year everything went wrong in the economy,' he says. He rode out the recession with further study, but the downturn hadn't ended by the time he left. Not fluent in a foreign language and with only six weeks' work experience, it's hard to find relevant work. 'I'd take anything: paid work experience, unpaid work experience.' Clearly, Mill does not lack determination. 'I'm going to keep going until someone lets me in,' he insists. 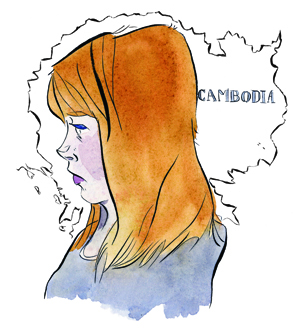 History graduate Fiona Brown (no relation to Jason), 23, has also had a confusing time. She left Warwick last year with a 2:1. Not knowing what she wanted to do, she waited until she left there to apply for jobs. 'People said get some experience, but I didn't know what in.' In September, she went to Cambodia for four months, applying from there for graduate schemes in a variety of roles, ranging from retail and marketing to the civil service. Returning in January, Brown got through a few rounds in most of them, and made it to the last 40 at John Lewis. 'They told me they had 4,600 applicants for three places. People said it's great you got so far, but I didn't get the job and that's all that matters.'

A month later, she started an internship in the communications department of an international development agency. She'll stay for more than five months, getting expenses of £10 a day, but thinks it's worth it. 'I've been given a lot of responsibility. I feel useful and it has increased my confidence.'

Her parents live in London, so she doesn't pay rent. Brown has decided she wants to work in marketing and communications, but knows the competition is tough. 'I'm aware I may have to do another internship,' she says. 'I'm positive at the moment, although I don't know how I'll feel when it ends and I've still got nothing.'

But are there hopeful signs? According to the High Fliers Research report The Graduate Market in 2012, the UK's leading employers are expecting to increase their graduate recruitment this year by 6.4% and public sector employers plan to expand their graduate intake by 21.9%. The sectors doing best include engineering and industrial companies, IT and telecoms, high street banks and retailers. AGCAS's Standley has noticed an upturn in mood among recruiters. 'It has been awful, but there's a feeling that we've turned the corner,' she says.

It's not much, but it might give hope to the unemployed bright young things out there. MT asks: what can you do to help?