Britain’s self-employed are getting poorer, according to research published by the Resolution Foundation this morning. Back in 1995 a freelancer could expect to take home an average of £300 per week, adjusted for inflation. Now they’d earn just £240 – equivalent to £12,500 per year.

As you can see in the chart below, self-employed wages have generally stagnated over the past two decades, only reaching their 1995 level again in 2007, before the financial crisis came along and put paid to that.

Fluctuating levels in self-employed pay reflect not a big change in what specific individuals are earning but ongoing changes in the types of self-employed work people are doing. Back in 1995 there was a much greater chance that if you were self-employed it was because you ran your own business – 23% of 1995’s self-employed workforce employed at least one other person, compared to just 11% today. And you would have likely been working longer hours too.

There have been big changes in the type of work Britain’s bossless workers have been doing too. Some are raking it in as contractors dashing around the country to fix IT problems or freelance business consultants ruminating on strategic challenges for £100 an hour. Some are business owners, not always taking a wage and dependant on their firm’s financial success if they want to bring home the bacon. 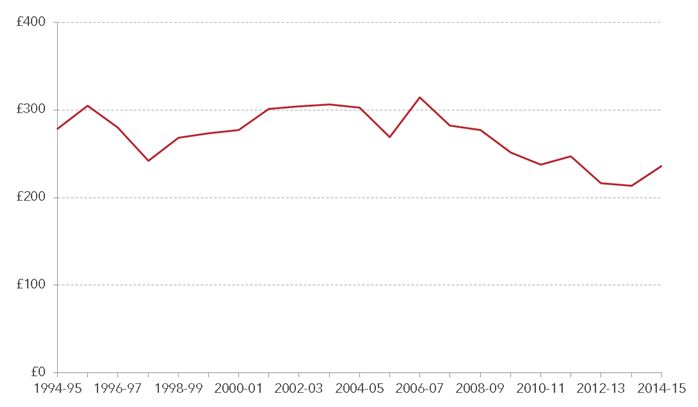 But according to the Resolution Foundation, the type of self-employed work that has really taken off since the financial crisis is of the insecure, low wage variety. Think couriers up at the crack of dawn to bring your latest Amazon purchase to your door. Taxi drivers waiting around for an app to tell them what to do. Those working in direct sales who won’t earn diddly squat if they fail to close a deal today. All of them ineligible for sick pay, maternity leave and the minimum wage.

The number of self-employed workers is up 45% since 2002 – they now represent one in seven of all workers. In the three months to May this year, nine out of 10 new jobs were for the self-employed. Some cheer this increase as a sign Britons are becoming more enterprising, seizing control of their career from the straightjacket of secure employment.

‘Those who decide to go it alone often do so in order to gain a more positive balance between work and their personal life... The majority find they are happier than they were when employed by somebody else,’ said Ed Molyneux, founder of accounting software firm FreeAgent, in a canned quote that found its way into my inbox this afternoon. He has a point - who hasn’t dreamt of striking out alone to make megabucks as an independent consultant, working when we want and with nobody to tell us when we can and can’t take a holiday. And even some of those doing low paid work are happier with the flexibility self-employment provides, especially if they are not the main breadwinner in their household.

But the reality is this explosion in self-employment has been driven by businesses keen to cut costs and reduce the risk of having to pay statutory benefits. The vast majority of those doing low-paid self-employed work do so because it’s the only work that’s available.

The prime minister has rightly ordered a review into work regulations - not least because what constitutes employment is increasingly blurred. Those self-employed people who work for just one company – like a logistics firm or a taxi app – can hardly claim to be their own boss when their livelihoods are still controlled so directly by their ‘client’. As companies shunt greater proportions of their workforce into ‘self-employment’, the state will surely have to act.

The pros and cons of setting in-office days versus giving your employees free rein.

How to banish Sunday night dread

Here’s why you might be getting Sunday night work dread and how to fix it....