It’s 10 o’clock on a weekday morning. The commuters have arrived at work by now and it’s too early for lunch, but still the line of punters at the Greggs on London’s Kingsway stretches out of the door.

Shoppers, students, tourists, construction workers in hard hats and hi-vis jackets – all human life is here, and they’re all hungry. Greggs’ CEO Roger Whiteside eyes the throng, eager to buy anything from a sausage roll and a cup of tea to a fruit pot and a flat white, with ill-concealed delight.

"Look at the queue! There’s always a big queue here," he says, flashing a broad smile, before we head behind the counter, through the kitchen area (Greggs prepares much of its food on the premises) to a room away from the crowd where it is quiet enough to talk.

The business has had quite a year. In its 2018 results, released in April, sales broke the symbolic £1bn mark for the first time. That’s a lot of steak bakes, chicken wraps and hot drinks – Greggs now sells more coffee in the UK than Starbucks, and only Tesco sells more sandwiches. Interims for the six months to June 2019 showed a whopping 58 per cent rise in underlying pre-tax profits, up to £40.6m from £25.7m for the same period last year.

A performance that looks all the more impressive when set against the background of insolvency and store closures that prevails across much of the UK high street. And now the company is rounding off the year with another landmark achievement – it’s been named Britain’s Most Admired Company for the first time, a remarkable jump to the top of Management Today’s annual peer-review reputation ranking from its 2018 position of 66th (see pages 65-71 for the full listings).

It’s also taken the criteria awards for Quality of Management, Use of Corporate Assets and Inspirational Leadership. These are big-league accolades more usually associated with giant multinationals like Unilever and Diageo than a relative minnow from the FTSE 250. "We punch above our weight because of our reach – we’ve got 2,000 shops now so everybody comes across a Greggs," says Whiteside.

"There’s been unbroken growth every year since 2013. We’re now number two in breakfast and number three in coffee." A big part of the secret to bucking the retail trend is for leaders to stay connected with what’s going on at the front line, says Whiteside, who spends two days a week away from Greggs’ HQ visiting stores around the country.

"You can’t run a retail business from the head office, you’ve got to keep in the thick of it or you lose touch." And with more new stores on the way – he reckons there is potential for around 2,500 in total – and 22,000 employees, that’s much harder to do than it sounds.

Greggs has always been known for low prices, but since Whiteside took over it’s been quietly upping the quality, too. A freshly made bacon roll and a pretty decent cup of coffee can be yours for less than two quid.

Greggs is increasingly the Lidl or Aldi to premium rivals like Pret and Leon; and as those discounters have discovered, in a market where consumer confidence is ebbing as economic growth slows, the message that you can save money without sacrificing quality is a powerful one.

That focus on the basics hasn’t stopped the business from exploiting new product lines and innovative routes to market. It’s become a master of social media and an unexpected champion of flexitarians everywhere, as the story of its now legendary vegan sausage roll illustrates. Launched in January 2019 after two years in development, the Quorn-based snack was a response to changing dietary habits, says Whiteside.

Not everyone liked the idea, however – it seemed to get up the nose of TV host and professional angry man Piers Morgan in particular. Thanks to his grumpy tweet ("No one was waiting for a vegan bloody sausage, you PC-ravaged clowns") and Greggs’ salty reply ("Hello Piers, we’ve been expecting you") the vegan sausage roll went viral. "It just exploded, we literally sold out overnight," says Whiteside. "All because of the extraordinary publicity it got on the back of Piers Morgan’s tweet."

It’s the kind of publicity that you can’t buy, and Greggs doesn’t even try to: "We’re not heavy marketers, we don’t advertise much on TV. We’ve always relied on word of mouth, and what social media does is allow us to accelerate that word of mouth because that’s most effective."

Greggs is working on providing greater dietary choice including a vegan alternative to its popular staple, the steak bake, and gluten-free options too. The acid test for alternative diet products is based, he says, on the vegan sausage roll approach.

"Would a meat-eater like it? That’s the hurdle it’s got to jump." So a gluten-free recipe only makes it onto the shelf if non-coeliacs would also choose it. Whiteside – who is currently trying out a vegan diet himself, having been persuaded by the Netflix documentary The Game Changers – says that the economics don’t currently stack up otherwise. 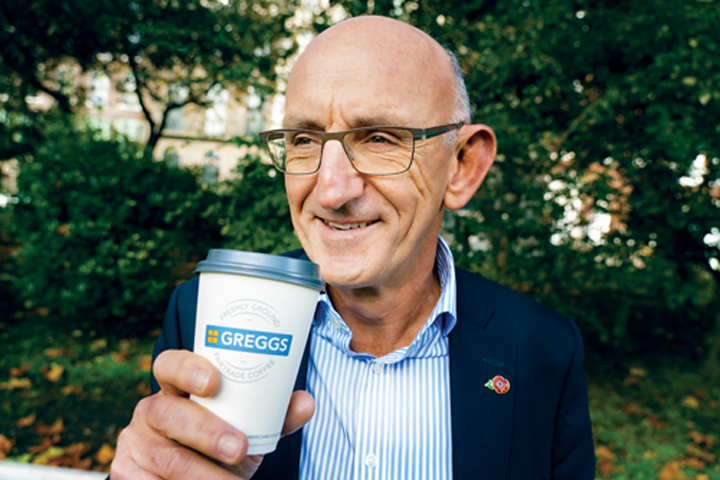 "Management Today, we've been expecting you."

"Although vegans are growing in number very quickly, there aren’t yet enough of them to support their own lines in our shops. It’s going to be flexitarians [people who do eat meat, or gluten, for example, but choose not to when an equally tasty alternative is available] who keep those products on our counter."

It’s a pragmatic line that reflects Greggs’ brand – grounded and inclusive, it supports choice but tries to avoid the messy and divisive end of food politics. "We invite everybody in and don’t exclude anyone. We keep it real and basically just try to be normal," says Whiteside.

That sense of normality owes a lot to the company’s roots as a family business based in the north, he reckons. John Robson Gregg started selling eggs and yeast door-to-door in Newcastle in 1939, and the first Greggs bakery opened on Gosforth High Street in 1951. It floated in 1984 and has paid a dividend ever since – one of the few British companies with an unbroken record of rewarding shareholders in this way.

"The business is all over the country now, but the head office is still in Newcastle, so a big part of the culture comes from there." And although there are no longer any family members on the board, Whiteside and his top team try to behave as if there still were. "We try to keep the corporateness out of it.

To maintain that family feel, to find a way to keep the growth going while retaining the values that got you there in the first place. "It’s a business that has always sought to be nice – one that is good to work for, that does the right thing in the community and is seen to be commercially successful but not in a red-blooded way. Customers see that, because it seeps through the pores of the business.

Not that Whiteside is frightened of a tough decision. Having studied economics at Leeds – a choice he says was "not vocational, just the path of least resistance" – he ended up at M&S as a graduate trainee and helped build its hugely successful M&S food business. He’s worked in private equity for Guy Hands at Terra Firma, as boss of Punch Taverns and also at pioneering online retailer Ocado.

When he joined Greggs in 2013, the business was at its lowest ebb, feeling the squeeze not only from supermarkets’ in-store bakeries but also from a slew of coffee and sandwich rivals from Costa to Subway. The company was at a crossroads, still profitable but growth had stalled.

He decided that Greggs simply couldn’t compete on all fronts and must focus its efforts on the one with the best growth potential – the trend for food on the go. "It is a growing market, even in the deepest recessions. I’ve been in food retail for 40 years and one thing I have learned is that people are time-starved and convenience is king."

It was a big shift that meant leaving behind its old business model, and many of its loyal customers who would now have to shop elsewhere for their daily loaf. Making more food on the premises meant that some of its large manufacturing bakeries had to close, and it had too many stores that were the wrong size and in the wrong places.

There were inevitably job losses, but they were handled in the fairest way possible, says Whiteside. "In the largest part of the business, the manufacturing supply chain, we opted to do redundancy on a voluntary basis. A hard-nosed business would never do that, because you always lose people you don’t want to."

Doing the right thing may cost you at the time, he adds, but in the end it pays off handsomely. "I prefer a culture where you are more inclined to make commercially sub-optimal decisions in the short term, because you’ll be around for longer if you do."

The restructuring paid off, and Greggs has been growing ever since. It might even have been a blessing that it hadn’t had to bite the bullet earlier than some retail rivals who are now struggling, he says.

But Whiteside remains pretty sanguine about the state of UK retail more broadly. "The thing about the high street is that it’s always been under attack. The first wave was when the supermarkets all went out of town and the high street was dying because of that.

Now the internet’s come along and is doing the same." There will always be winners and losers, he adds, and the winners will be businesses like Greggs that are prepared to change.

Now Whiteside is eager for even more change, in the shape of phase two – "the most exciting bit" – of his grand plan. He calls it "multi-channel Greggs" and behind the jargon lies a well thought-out marriage of technology and old-school retailing.

Essentially it’s a digital extension of the current strategy of being in the right place at the right time. "Nobody leaves the house thinking ‘Where is my nearest Greggs?’" he says frankly.

So there’s an app, of course, and Greggs food is now available on Just Eat’s ubiquitous delivery platform. The idea is to give each store a range of different catchments, with the ability to service not only walk-in customers, but also car drivers and virtual punters who only interact online.

These are all discrete groups of new business says Whiteside, and must be treated as such – if a driver has to get out of their car, they will lunch elsewhere, and someone who is looking for delivery at night is not going to leave their nice warm house and trudge a mile down the road in the dark to a store instead.

So there will be more drive-in Greggs to add to the six that are already open and the delivery service will roll out nationally. There will also be Greggs’ own version of click and collect, and personalised online ordering to entice yet more customers into the virtual fold.

"There are people who know what they want, but aren’t prepared to come to the store to see if it’s available – that’s click and collect. Then there’s customised ordering: people who want a ham and cheese baguette, but with no cheese. All of these things will have to be accommodated."

And as we already know, there is nothing that Roger Whiteside enjoys more than the sight of a healthy queue.